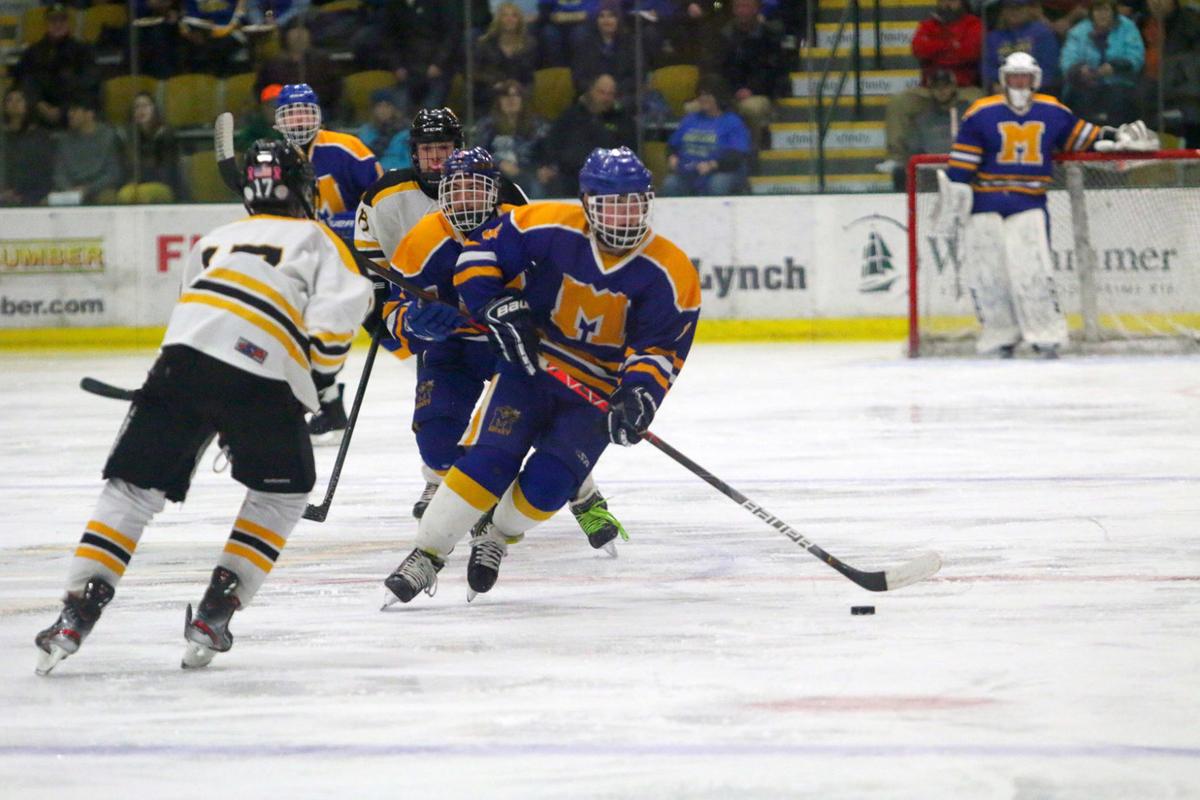 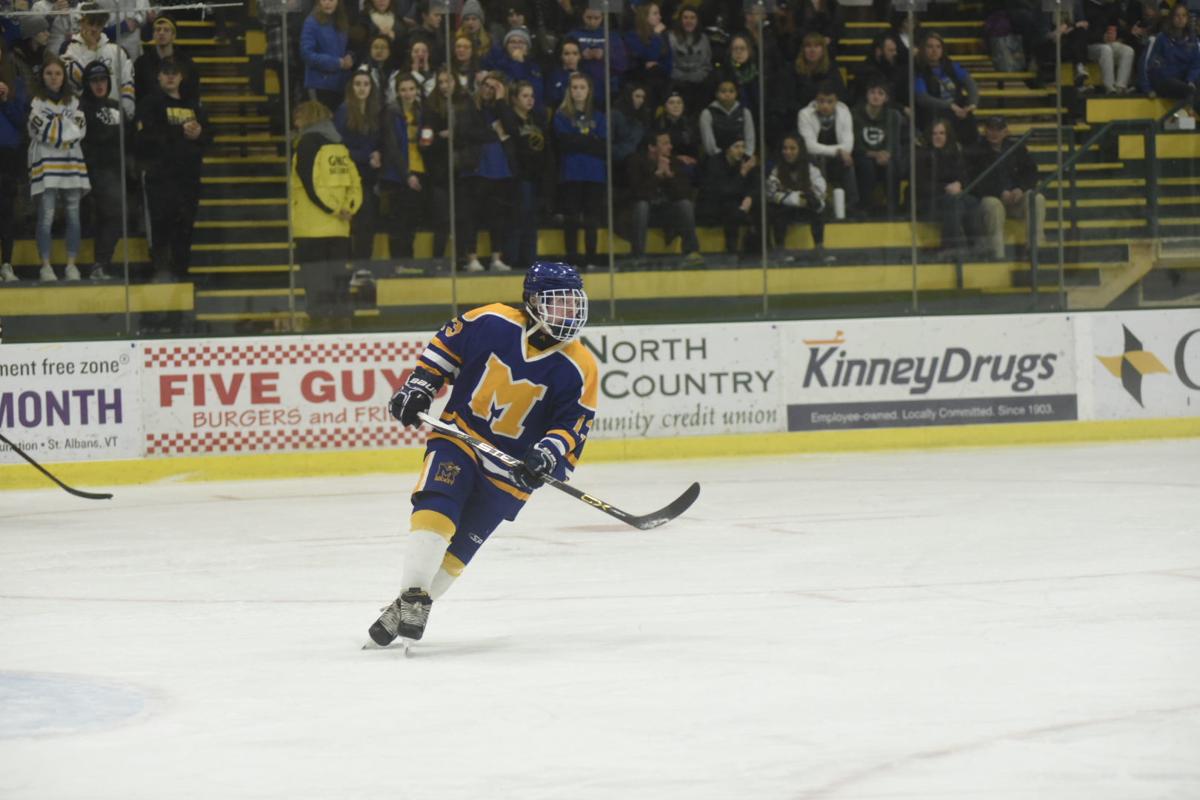 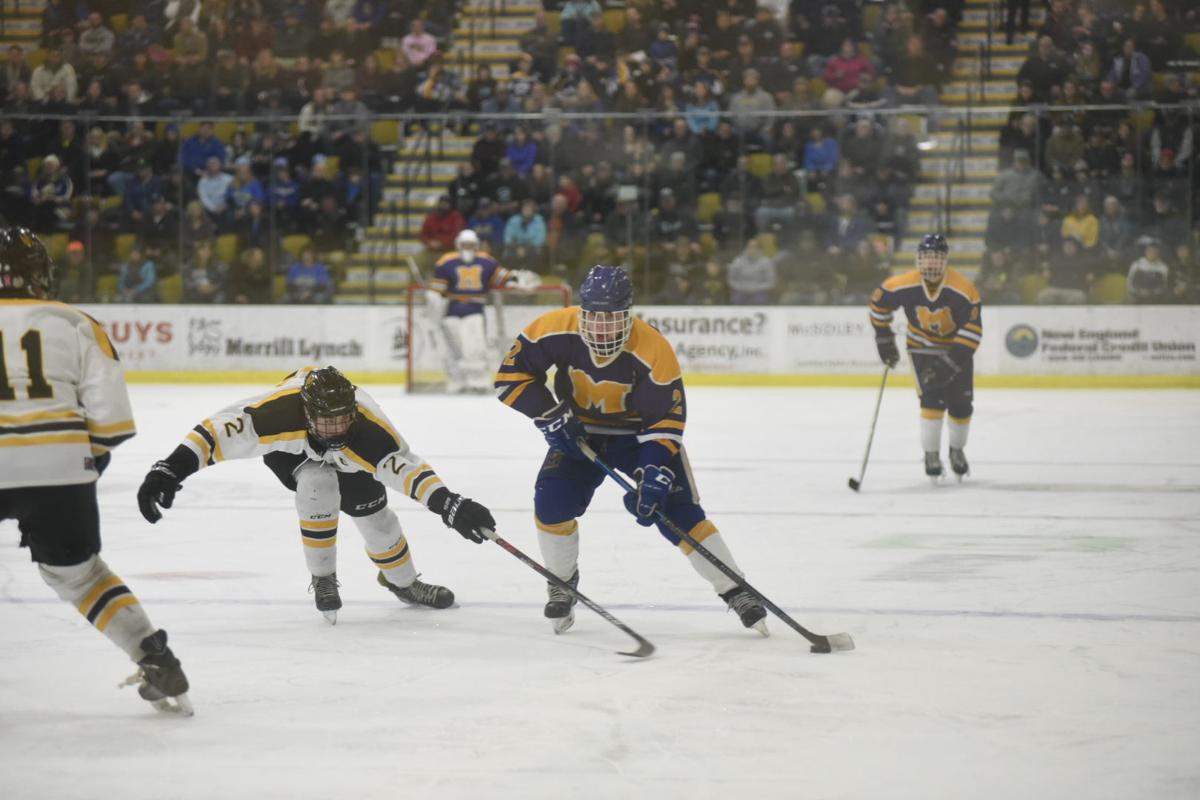 Owen Perry, of Fairfax, brings the puck down the ice as part of the Milton High School team during Wednesday night’s DIII championship.

Owen Perry, of Fairfax, brings the puck down the ice as part of the Milton High School team during Wednesday night’s DIII championship.

Heads were held low with runner-up medals strung around them as a group of young men, with a yellow M donned on their chest, walked off the ice of The Gut Wednesday night.

Those same young men not only experienced--and created--one of the most successful campaigns in program history, but they had the chance to experience one of the most exciting and suspenseful scenarios in sports: overtime of a winner-take-all hockey game where every shot could be the last of the season.

Milton head coach Bryant Perry said he told his team in the locker room afterwards, “There’s nothing I can say that’s going to make this any easier.”

“Hopefully they can go back and reflect on how the season went--how the atmosphere was here and making it here,” Perry added. “I told them I was proud of them and it was a pleasure coaching them.”

“At the beginning of the year, we set our goals and kind of figure out where we want to be,” Perry said, “and, obviously, getting here is on top of everybody's list. So it's just been hard work--keeping that focus. And then you start getting into the season, consistently stay in the top five in the rankings, and it's like, ‘Hey, we can do this.’

“To get here after so many years... it's hard for them, because it’s obviously not the outcome we wanted. But I'm proud of them either way.”

Harwood took a 1-0 upper hand in the first and then added to its lead in the second period with a quick score off a faceoff in its attacking zone. Milton junior Dustin Brunelle nearly got his team on the board with 6:35 to go when he sent a shot off the Highlanders’ goalie and then put a second-chance opportunity off the left post.

The Yellow Jackets would cut their deficit in half just a couple minutes later, however, on a stellar pass and finish. Senior Owen Perry brought the puck across the blue line, defeated a defender, and went at the cage before dishing off a pass to classmate Nicholas Desouza who made a tremendous, backhanded flick past the Harwood netminder.

Shortly after the game went into the third with the score still at 2-1, Milton senior Christopher Lefebvre evened things. Sophomore Cooper Goodrich got the puck on the left side of the side and took a shot which was turned away by the Highlander keeper; Goodrich got to the carom, wrapped around the back of the net and put another shot off the Harwood goaltender. This time, however, Lefebvre was there to knock home the rebound.

Referees consulted the goal judge to see if the puck had been put in illegally, but they ultimately decided that it was a legitimate score.

Both sides had plenty of quality opportunities late in regulation including one which saw Desouza fly down the ice in the final minute and deke around a defender--only to send his attempt wide. At the other end, Milton senior goalie Jackson Ehler came up with some great saves to help give his team extra chances.

With overtime looming, Milton suffered a tough setback when it was called for a penalty with just 4.7 seconds on the clock. At the end of regulation, Harwood held a 34-28 advantage in shots on net and carried the bulk of a power play into the extra session.

There wasn’t any one thing that Perry could point to as being the factor for how his team made it to overtime in the state championship--especially after being down 2-0 going into the third period.

“Jackson making big saves and keeping us in the game, being relentless and keep going to the net, getting the pucks to the net, and the never-quit attitude that these guys had all year--that's what got us there. Unfortunately, things didn't work out. We had our chances, but they buried--we didn't.”

The Yellow Jackets nearly killed off the penalty, but Harwood finally capitalized with four seconds left in the man advantage to toss the sticks and gloves into the air and celebrate the win.