You have permission to edit this article.
Edit
Home
News
Schools
Things To Do
Real Estate
Milton FAQ
Opinion
Classifieds
Obituaries
Business Directory
About Us
1 of 6 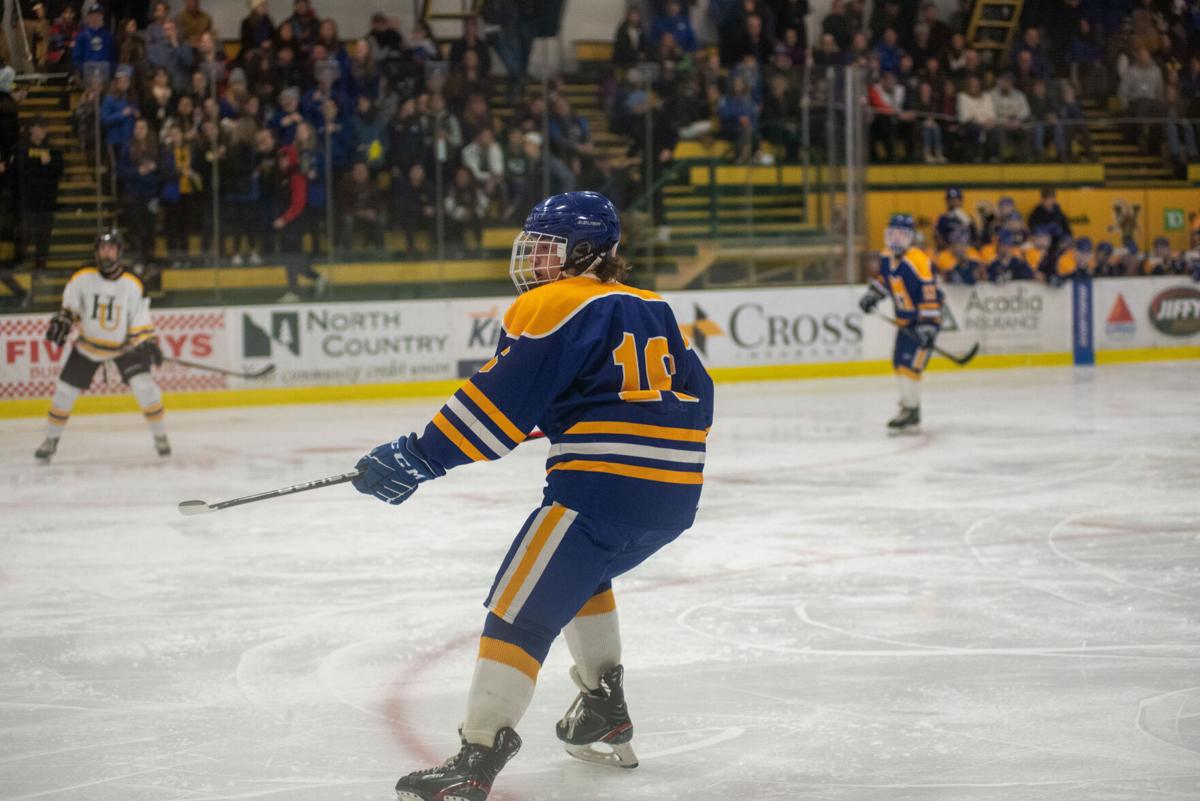 Jaxon Schaarschmidt skates on the ice with the Milton Yellow Jackets. 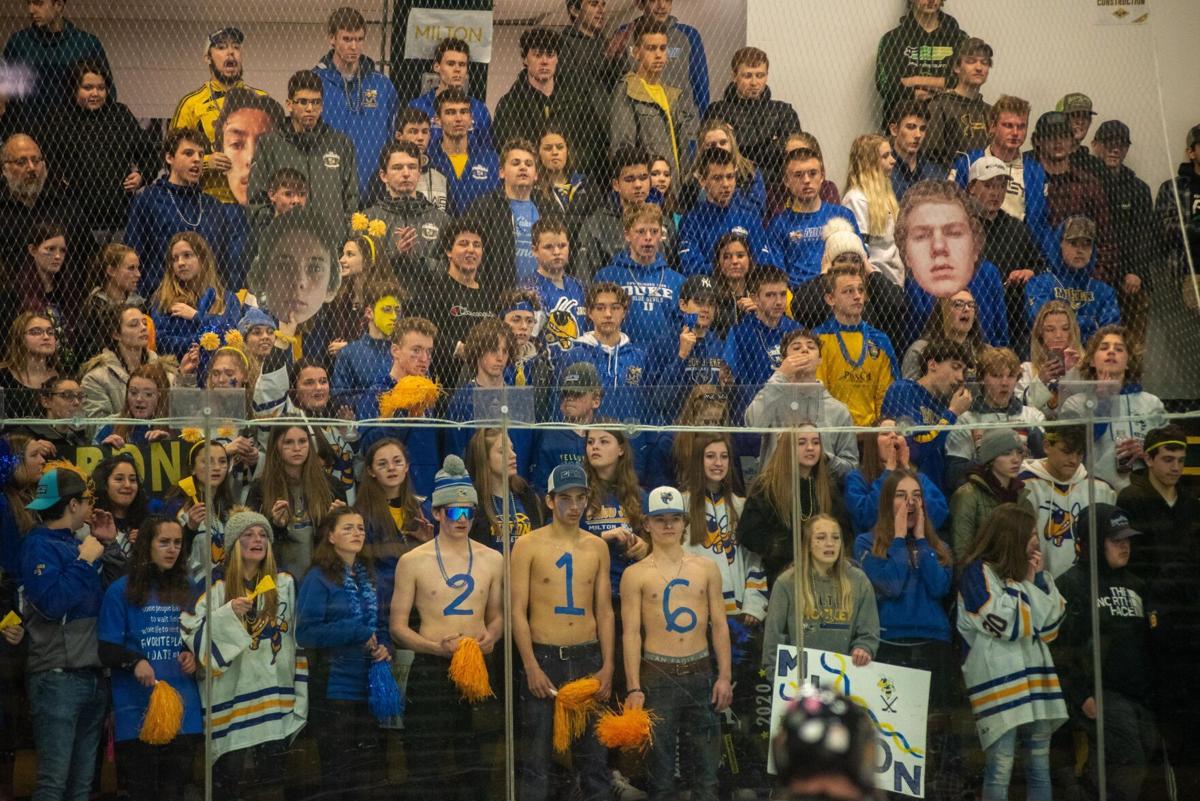 Fans from Milton and Fairfax fill the bleachers at Gutterson to cheer for the Yellow Jackets in the DII state title game in 2020. 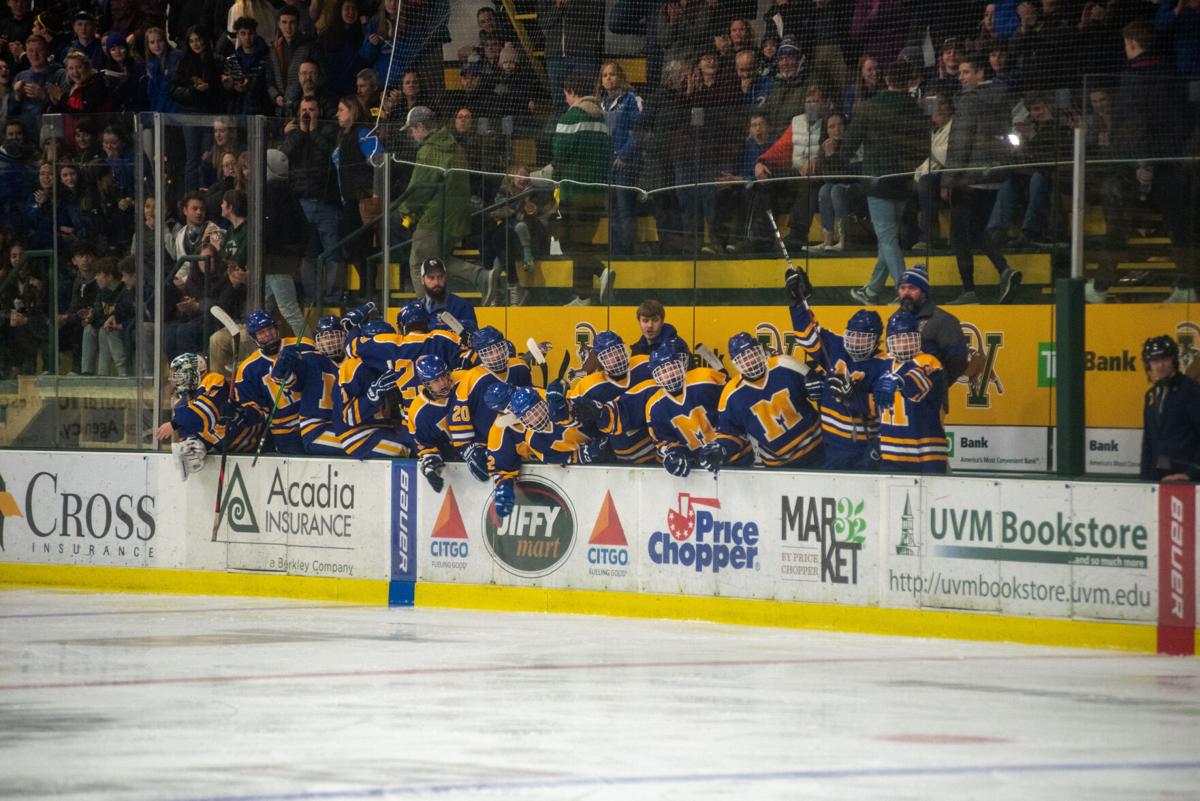 The Milton bench cheers for their teammates on the ice.

The Milton bench cheers for their teammates on the ice. 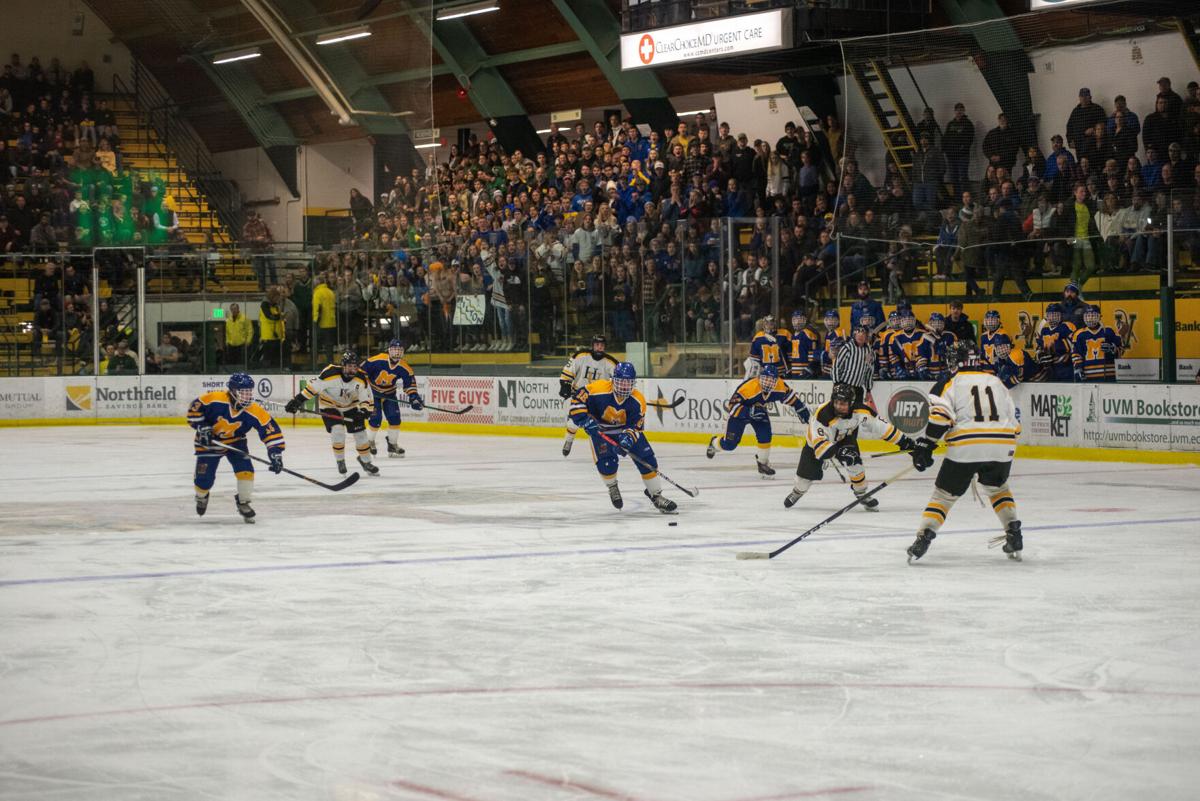 Jaxon, center, skates the puck down the ice in the DII state final, the crowd roaring behind him. 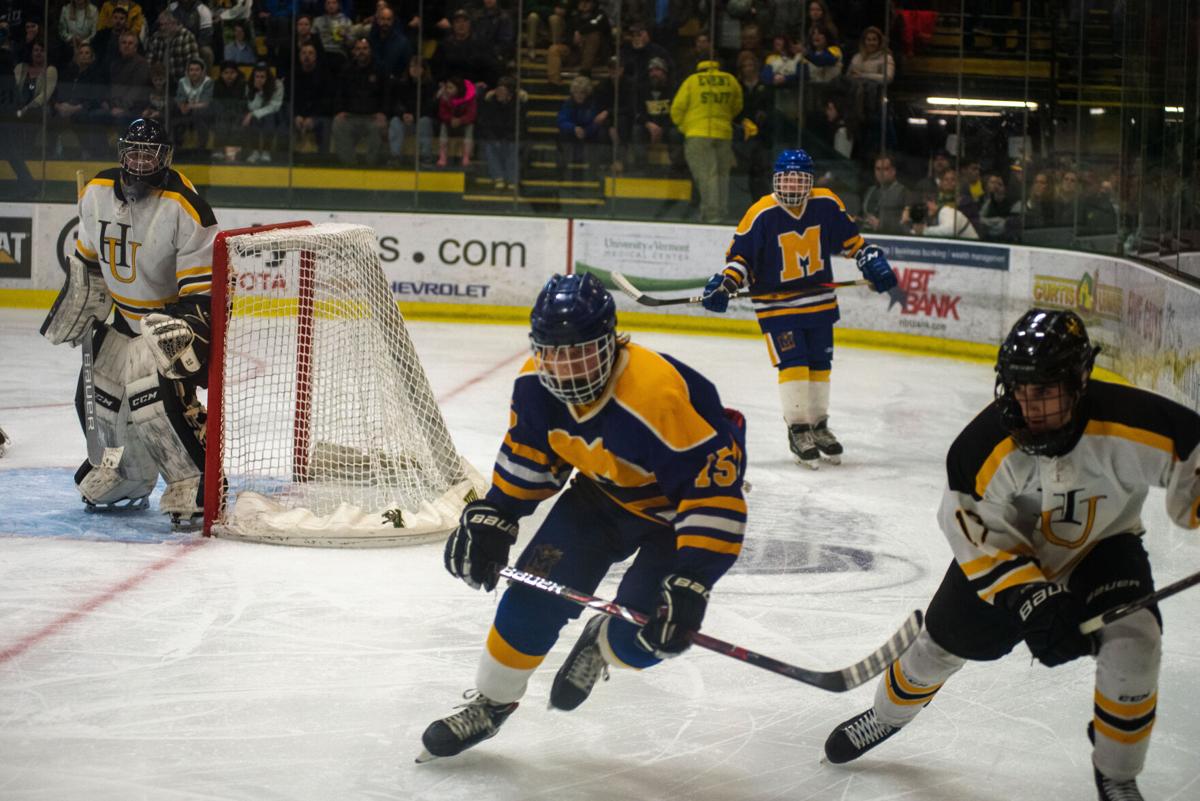 Dustin Brunelle (15) follows a Harwood skater into the corner in the DII state championship game. 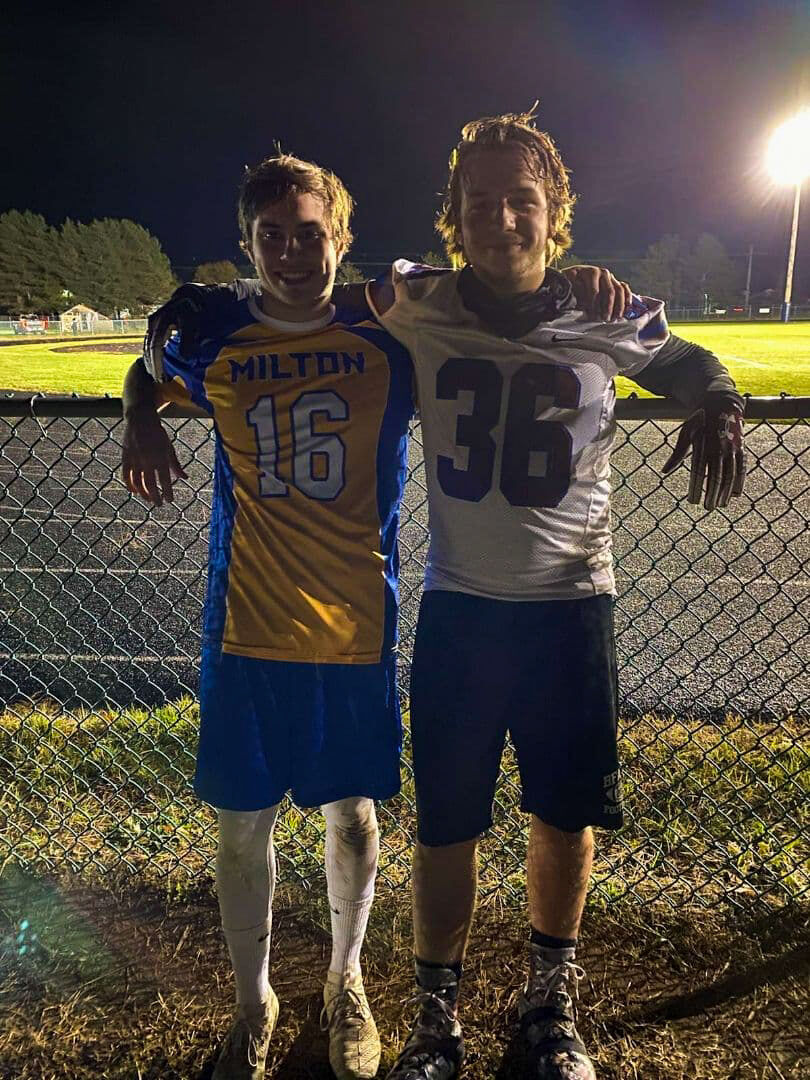 Dustin Brunelle and Jaxon Schaarschmidt pose for a photo after a 7v7 touch football game in the fall of 2020. The athletes are teammates in hockey and opponents in football.

Since joining the Milton Yellow Jackets, Schaardschmidt has become friends with Milton student-athletes, including Dustin Brunelle.

Brunelle and Schaardschmidt are teammates during hockey season but meet as opponents on the football field.

How long have you known each other? “I remember playing youth hockey against Dustin. It’s neat that someone lived those moments with me from a different perspective,” said Schaardschmidt.

Schaarschmidt: “It’s so much fun lining up, about to snap the ball, and looking down the line of scrimmage and seeing Dustin is going to be covering me. I’ll congratulate him if he scores on us or makes a big play, but I want to see him work for it!”

Brunelle: “I would warn my teammates about the threat Jaxon posed with his speed and his skill. It’s fun to meet on the field; sometimes you’re in a play, and you don’t realize you interacted. There’s always that element of challenging each other, whether we’re playing as teammates or opponents.

What do you enjoy about playing as teammates?

Brunelle: “I enjoy having his speed on my team rather than having to outrun or out-skate him! It saves a lot of energy. I know I was sore after our football game this year!”

Schaarschmidt: “We’re challenging and pushing each other in practice, and in games; playing side by side, you can really push each other.”

Is the transition from opponents to teammates as you expected?

Schaarschmidt: “It comes naturally being able to see someone you know in one sport and play against them in another. You develop a rivalry and mutual respect that increases with the years.”

Brunelle: “There’s a strength that comes playing as both teammates and opponents. That friendship helps you to succeed and to challenge each other. It’s a fun aspect of our friendship.”

What are your most memorable games as teammates?

Schaarschmidt: “We played MVU in playoffs last year, and the energy in the Highgate Arena was comparable to the Gutt. I’ve never seen so many people in a high school rink.”

Brunelle: “Last year’s state championship was my most memorable game. There was so much pressure to do your best; one mistake, and you could lose your chance at a title.”

Schaarschmidt: “There’s so much energy in the Gutt — it’s just coursing through you. We were playing that game for our seniors, all of us working together as a unit.”

Dustin’s scouting report on Jaxon: ”You’ve got to put a lot of points on the speed. Jaxon’s always been fast, whether he’s skating or running. He’s a good back checker and forechecker. He’s got strength and size in his arsenal, and he’s smart to make the plays.”

"My freshman year, when we had a lot of lefties, I was put on right-wing, and it just stuck."

Jaxon’s scouting report on Dustin: ”Dustin’s a big support guy; he’s there when his teammates need him, and his positioning is almost perfect. There’s never a time he’s not ready; he’s looking for that pass, he’s there. I’ll see him come out of nowhere; you’re not expecting Dustin to keep on working--any other person in that position would be gliding two strides ago. He’s a big back checker. Physicality is there; he may not be the biggest guy on the ice, but he packs a hit.”

Athletes will have to create their own energy when games get under way.

Brunelle: "The energy in the arenas with no spectators will be so different. Our last game was at the Gutt in front of a packed house; it will be so weird coming from that to playing for no one. Our coach has been encouraging us to cheer for each other through a drill."

They'll also have to learn to cope with no locker rooms, masks during competition, and chilly bus rides.

What do you enjoy about hockey?

Brunelle: “I don’t have any particular reason--I’ve always loved it. I enjoy the pace of the game, and I’ve made a lot of great friends on my hockey teams.”

Schaarschmidt: “The pace of the sport is unlike any other sports I’ve played. You’re going to get hit and get knocked down, but you’re going to get up and, hopefully, get a goal. I also love the uniqueness of skating. It’s the most important thing you do in hockey--and the coolest and most fun.”