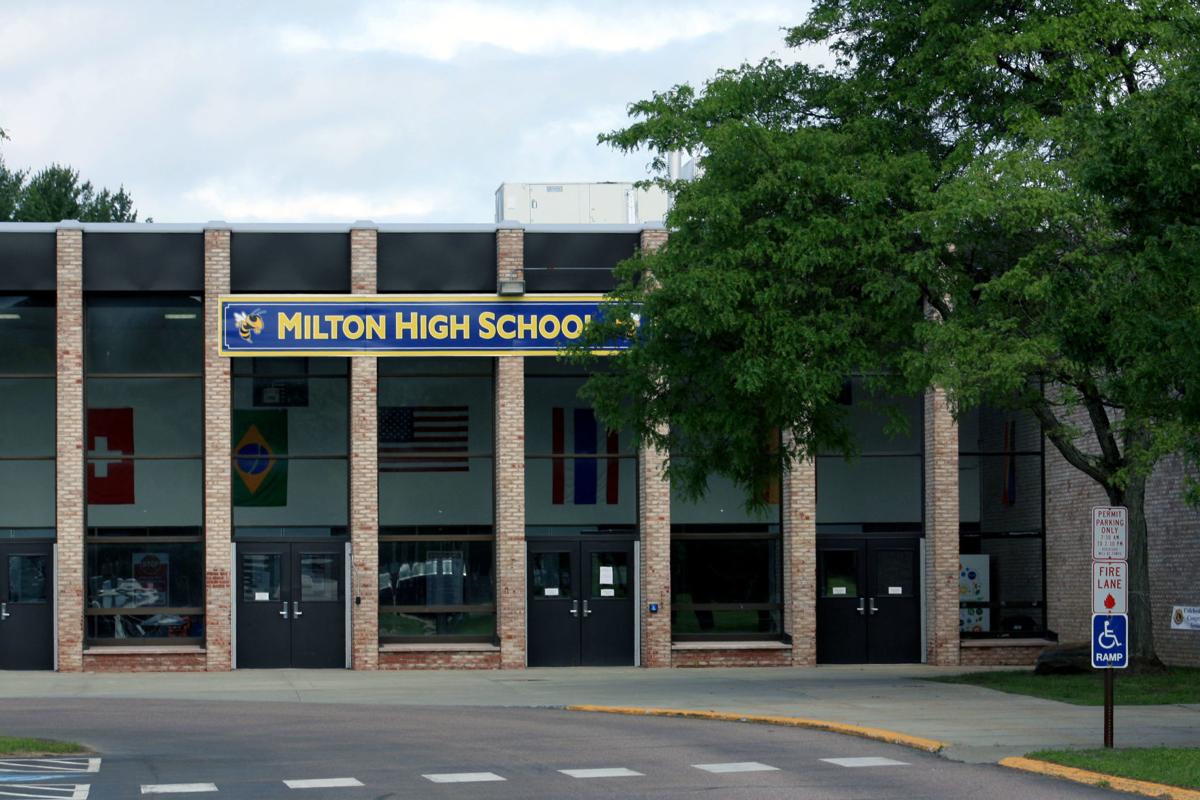 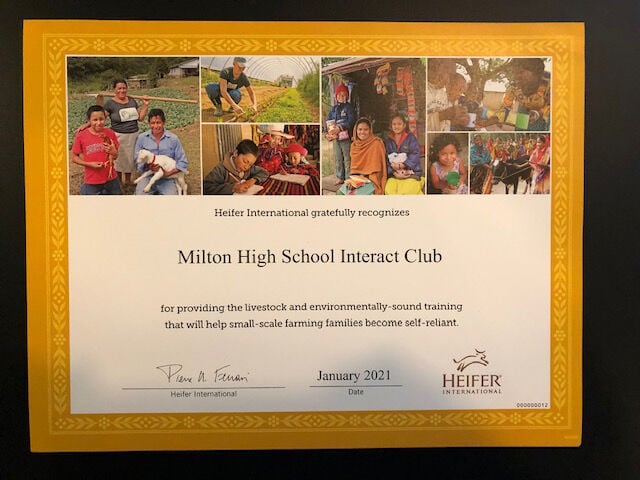 A certificate certifying Interact's donation to Heifer International in January 2021. 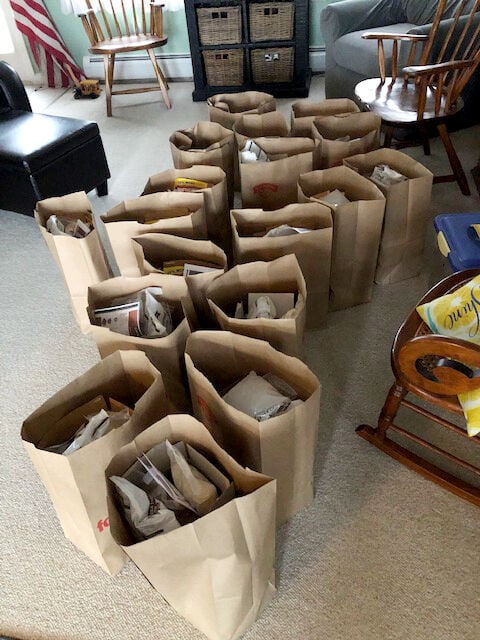 Bags of food Interact collected and donated to the Milton food shelf in fall 2020.

MILTON — Students in Milton High School’s Interact club aren’t letting the challenges of virtual meetings stop them from making a difference in their community.

So far this school year, the community service club has donated food and money to both local and international organizations and has volunteered at town polling locations.

Interact is advised by Jennifer Haas, a guidance counselor at MHS, and Kevin Endres, youth services chair of the Colchester-Milton Rotary Club.

The club began at MHS nearly eight years ago, and Endres has been an adviser for the group since then.

“Interact is kind of under the auspices of Rotary,” he said. “We begin each weekly meeting with the Rotary Four Way Test: ‘Of the things we think, say or do; Is it the truth? Is it fair to all concerned? Will it build goodwill and better friendships? Will it be beneficial to all concerned?’”

Club President and senior Manolis Anemikos said he joined Interact as a freshman, when his older sister was the vice president.

That year, the club donated money to an organization that supplies polio chairs to individuals paralyzed by the disease. Afterwards, the organization sent Interact photos of the chairs being used, and Anemikos said that helped him understand the true impact of their work.

“I thought I'd be able to put what I learned at the program to use and wanted to be in an environment with people who were really enthusiastic like I was at RYLA,” Kaigle said.

What the group has done so far

This school year, the club has focused on combating food insecurity, an issue that’s been heightened by the pandemic both locally and nationally.

In October, Interact hosted a food drive at MHS. The group placed paper bags in advisory classrooms along with a list of needed items. Students and faculty contributed to the drive.

“We came up with a few decent sized boxes of food to give to the food shelf which felt really good,” Kaigle said.

A month later, ahead of Thanksgiving, Interact helped collect Thanksgiving meals for the Milton Family Community Center. In conjunction with the Rotary Club, the group donated 18 meals.

Interact also donated almost $200 to Heifer, an international nonprofit that distributes livestock and provides agricultural-based training to families in need around the world. Their donation was enough to gift a flock of chickens and a goat to a small-scale farmer.

What’s next for Interact

On Town Meeting Day, March 2, several Interact students will be volunteering at the polls.

Some members of the club, including Kaigle, also volunteered during the general election in November. They helped count ballots, sanitized voting booths and provided directions to voters.

Endres said that had been the first time students had helped the town with elections.

“I’m looking at it as a long term connection,” he said.

Volunteering during elections has been Kaigle’s favorite project as an Interact member.

"Over the past year or so I've just been really kind of appreciating Milton more and just seeing it in a new light and appreciating these things I took for granted."

“Over the past year or so I've just been really kind of appreciating Milton more and just seeing it in a new light and appreciating these things I took for granted,” she said. “Helping with the election opened my eyes to something about my town that I hadn't really spent much time thinking about. That really left a mark with me.”

In addition to helping with the election, Interact is looking forward to a collaboration with Meals on Wheels which will take place this spring. Students plan to write letters which will be included in meal packages that are given to the community’s senior citizens.

“We want to offer ourselves up as pen pals to people who might be lonely during the pandemic,” Anemikos said.

The group is currently struggling with recruitment, as remote learning and social distancing makes it difficult to connect with other students. This year, the group has about 15 members, and most of them are seniors.

Endres worries that when the current leaders graduate, there won’t be much left of Interact. He hopes other students will see value in community service, and join the group’s weekly virtual meetings.