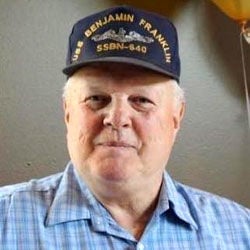 Larry Richard Companion, 77, died peacefully early Wednesday morning, January 22, 2020 at the University of Vermont Medical Center in Burlington, with his loving family by his side.

Larry was born on November 12, 1942 in So. Burlington, the son of Leo and Doris (Broadwell) Companion. He graduated from Ware High School in Massachusetts in 1960 and enlisted in the US Navy. On September 24, 1966, he married Brenda Kay Clements in Somerville, S.C.

Larry enjoyed, hunting, fishing and feeding the chipmunks in his backyard.

He retired from the Navy following 20 years of service, including serving aboard the nuclear submarine the USS Benjamin Franklin.

Upon retirement, he worked several years for Hilson Hardware and Shaw’s.

Memorial contributions in Larry’s name may be made to either the American Heart Assoc. or to the Diabetes Assoc.

At Larry’s request there will be no services.

For those who wish, online condolences may be made to minorfh.com.