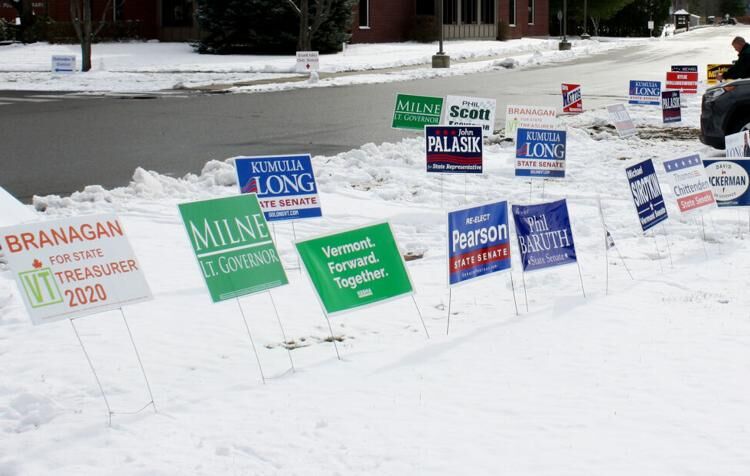 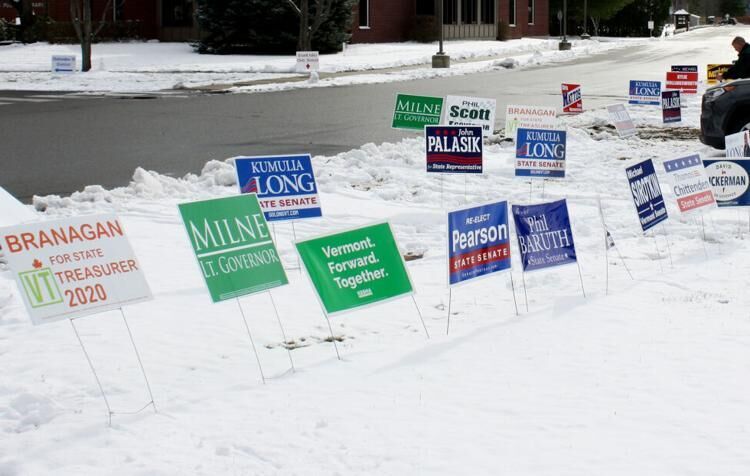 Town Meeting Day elections are officially less than a month away, which means another campaign season is ramping up.

As seen throughout 2020’s elections during the COVID-19 pandemic, distanced campaigning is necessary for candidates who, likely, won’t be knocking on doors and talking with local residents face to face. In addition to standing on a corner in the cold and waiving to traffic, those running for local offices will have to get creative in how they promote themselves and their stances.

And then there’s the always-popular method of getting a candidate’s name out: campaign signs that are widely seen in front yards and along public rights-of-way.

Researchers have suggested that campaign signs can be beneficial in elections because they help build name recognition, their presence is a sign of a candidate’s quality or viability -- as voters might perceive that the candidate’s campaign has the resources and staffing to afford and deploy the materials -- or because they contain more information about the candidate than just a name which can influence a voter’s opinion.

A study published in 2015 by lead author Donald P. Green of Columbia University concluded that, on average, lawn signs can increase a vote share by 1.7 percentage points -- possibly enough to swing a tight race.

But if you’re planning on promoting a candidate by placing campaign signs somewhere, know that there may be restrictions on when and where you can put them based on the town in which you’re doing so.

The Vermont Secretary of State (SOS), Elections Division has no authority to regulate the placement of political campaign signs. It does, however, provide municipal officials and candidates with a brief guide to laws in the state that may govern temporary political signs.

State law doesn’t allow for political signs to be banned altogether, however they may be regulated by either a local sign ordinance or municipal zoning bylaw -- such as to their size, location, and duration. Legislative bodies, like selectboards or school boards, might have adopted ordinances, regulations, or policies that either prohibit the placement of temporary signs or allow placement for a short duration on property owned by towns or public schools.

For Milton, Town Clerk Sheryl Prince said there are no rules regarding where and for how long people are allowed to place signs. The town only asks that the signs are removed “within a reasonable time” after the election. She added that signs should only be placed within town right-of-ways and that there is no guarantee that VTrans won’t pick up signs if it feels they are in the way.

The SOS recommends that you check with the clerk of the town or school district in which you plan to place signs beforehand to see if there are adopted ordinances that you need to follow. Enforcement of rules and regulations can include the removal of signs by the Travel Information Council, the Agency of Transportation, a legislative body like a selectboard, or a zoning administrator or other town official if permitted under the established ordinance.

This $439,000 East Road home is great for both gardeners and water lovers with raised beds, a pool and hot tub

Seeing Vermont: Here are 14 photos of Island Pond, a census-designated place in the Town of Brighton