MILTON — In response to recent discussions regarding police reform and racial equity, the Town of Milton will create a Police Advisory Committee.

The creation of the committee was unanimously agreed upon last night during the selectboard's Aug. 31 meeting. The committee will meet once a month to discuss racial and mental health issues, develop strategies and to increase transparency.

Milton Police Chief Stephen Laroche and Director of Public Safety Michaela Foody did the majority of the work on the proposal which was brought to the selectboard Monday night.

Though the board had not intended to vote on the committee Monday they did anyway, citing a need to move quickly and to be proactive.

"I'm willing to hash this out tonight," Clerk Chris Taylor said. "I don't want to drag our feet on this."

Here's what you need to know.

The committee will be composed of five members who should represent a range of community interests and experiences.

Milton business owners, educators, faith leaders, non-profit workers and students are encouraged to apply by Oct. 2. All members will be appointed by the selectboard and serve a two-year term to allow for greater participation by interested parties.

"We think it's very important to have youth representation on this committee," Town Manager Don Turner said.

The original proposal stated the selectboard would pick one of the committee's five members to be the chair, but Brenda Steady and John Fitzgerald opposed this plan.

"I think the committee should pick their own chair," Steady said. "I know what it's like to be on a committee where the board picks the chair and it isn't great for morale."

The board agreed to make this change to the document.

The committee won't have the power to investigate or review matters involving police personnel or criminal incidents.

Instead, the PAC will act solely as a sounding board — providing suggestions, ideas and thoughts which Laroche will take back to the department and implement as he sees fit.

According to the committee's proposal document, some discussion topics might include:

Members of the committee will be given annual summaries of police statistics, including number of police uses of force, police pursuits, citizen complaints and crime rates.

Members are also encouraged to go on a ride-along and to tour the department with an officer to familiarize themselves with standard procedures and operations.

Milton wants to be a leader when it comes to community policing.

While the Vermont state legislature was actively discussing police reform before it went on its summer recess, Milton has decided to move ahead without its guidance.

"We don't need to wait for the legislature when we can lead here in Milton," Turner said.

When Laroche and Foody were being interviewed for their current positions, Turner said they discussed ways to further engage the community in policing. Laroche, who has also advocated for the inclusion of a mental health specialist within the department, has spent much of his tenure as chief working to move the department forward.

Other Vermont towns with some version of a police advisory committee include St. Albans, Barre and Hinesburg. The State Police Advisory Commission provides feedback and suggestions to the Vermont State Police department.

"I am honored to be one of five people on this board to have enacted this committee," Chair John Palasik said.

Read the entire description of the Police Advisory Committee: 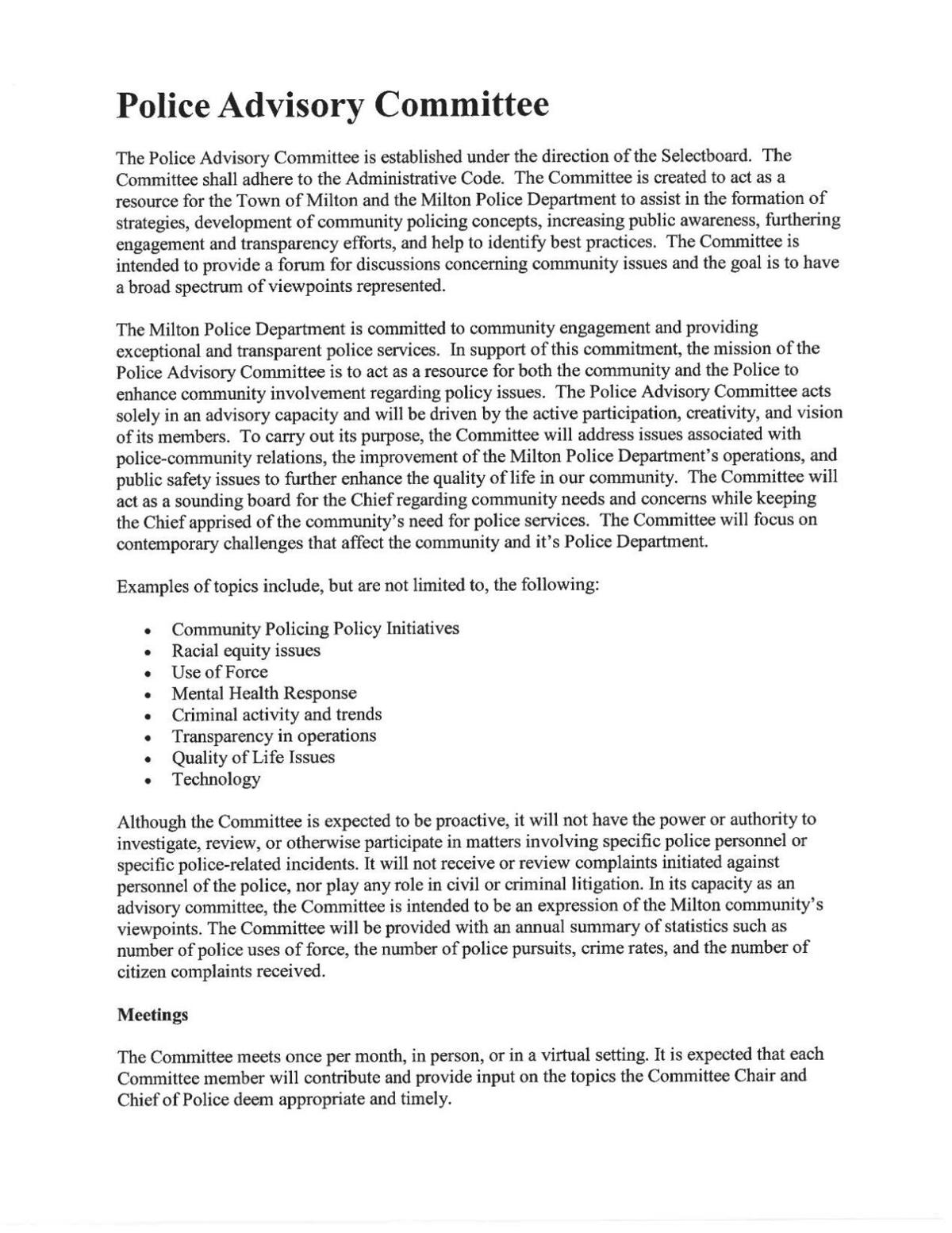