You are the owner of this article.
Edit Article Add New Article
You have permission to edit this article.
Edit
Home
News
Schools
Things To Do
Real Estate
Milton FAQ
Opinion
Classifieds
Obituaries
Business Directory
Holiday Shopping
About Us
1 of 2 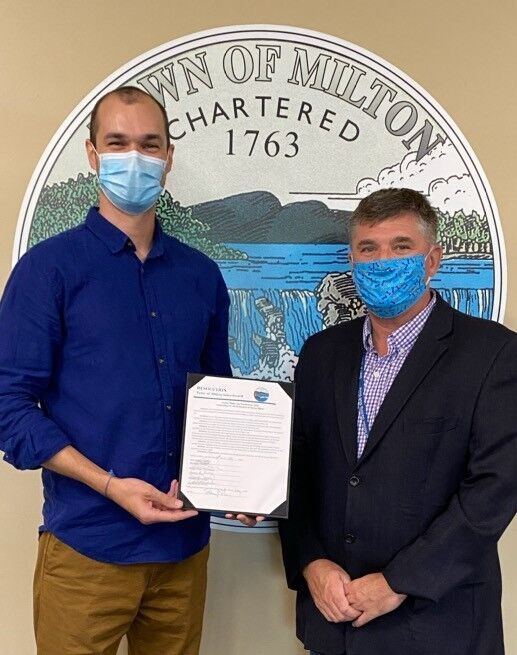 A former Peace Corps volunteer, turned author, entrepreneur and social justice advocate, is on a mission to teach Vermonters about human rights.

After working last year with Gov. Phil Scott to solidify Dec. 10 as Human Rights Day in Vermont, Justin Bibee wants to help every town in the state adopt a resolution recognizing the day.

Human Rights Day is observed around the world every year on Dec. 10, the day the United Nations General Assembly adopted the Universal Declaration of Human Rights.

Chaired by former first-lady Eleanor Roosevelt, a UN committee in 1948 drafted the document that proclaims everyone is inherently entitled to certain inalienable rights regardless of race, color, religion, sex, language, political or other opinion, national or social origin, property, birth or other status.

"It’s not just their rights in far-away places, it’s our human rights in our own backyards.”

“When people think of human rights they often think internationally, globally,” Bibee said. “However, it’s not just their rights in far-away places, it’s our human rights in our own backyards.”

Bibee said Turner called him soon after the resolution was signed to discuss how to turn the proclamation into action on the local level.

“Throughout my time advocating for human rights, Turner is the only leader to actually pick up the phone and reach out to me and say, ‘OK. I hear you. What can we do, what can I do to support you and support human rights?’” Bibee said.

Turner said he believes his job description is expanding and evolving, to include not only overseeing town services and projects, but to lead on issues of social responsibility and fairness.

“In town government, you keep the lights on, you keep the roads plowed, you keep business going and so on,” he said. “And so these bigger, more meaningful issues I don't think were as common in local government before.”

Going forward, Turner is open to not only bringing resolutions to the selectboard, but finding ways to turn those words and promises into actions.

“This is what people expect today, so as long as I’m Town Manager, this will be part of the role that I play."

“This is what people expect today, so as long as I’m Town Manager, this will be part of the role that I play,” he said.

Bibee hopes he and Turner can work together to organize a few community events to be held in town Dec. 10. Bibee’s dream is a community-wide human rights film festival, but knows the pandemic and health guidelines might make this impossible.

Action is ideal, he said, but discussion and thought are also a step in the right direction.

After serving as a Peace Corps volunteer in Morocco for two years, Bibee is now a Housing First service coordinator for Pathways Vermont, an organization working to end homelessness and provide innovative mental health alternatives.

“I have clients who live in Milton,” he said. “Every one of my clients lives in poverty, some live in extreme poverty. And poverty and human rights violations are no strangers.”

While in Morocco, Bibee founded Humanac, the country’s first volunteer-based human rights organization. His work building Humanac earned him a spot on the Forbes 30 under 30 Social Entrepreneur list in 2016.

“As a human rights advocate you become a direct participant in great changes in your community,” he said. “I consider that a tremendous opportunity. The well-being of human rights depends on you doing what you can with what you have, where you are.”