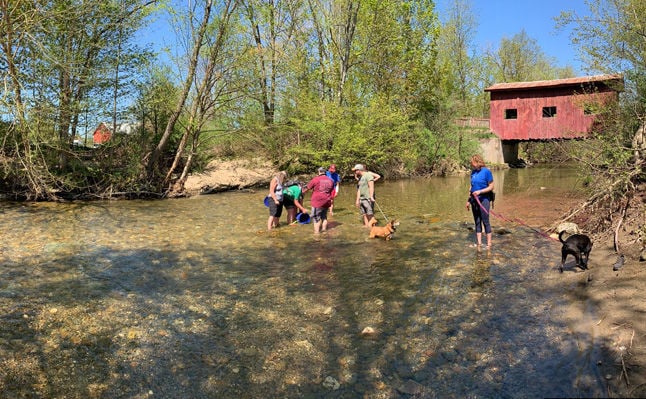 Milton Middle School hosted a virtual classroom at Mills Riverside Park in Jericho on May 22. 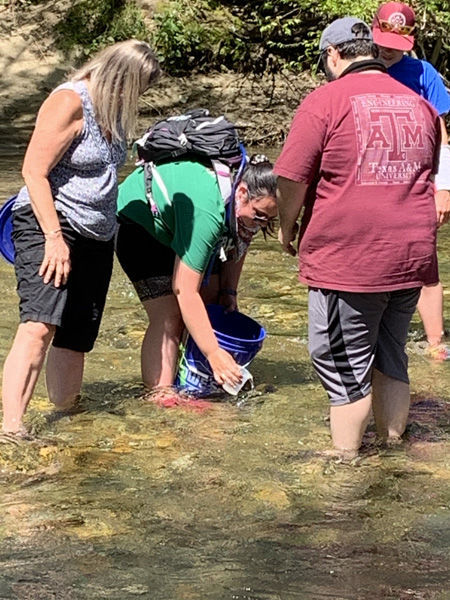 Milton Middle School science teacher Meagan Beley-Finnemore releases brook trout for Trout in the Classroom at Mills Riverside Park in Jericho on May 22.

For the third consecutive year, teachers from the Milton Middle School’s (MMS) science department have helped their students raise trout in the classroom before sending them into the wild.

While the students weren’t able to partake in the culminating field trip to a Jericho point of Browns River where the fish are released, a lot of them were able to virtually join their teachers and watch it happen online on May 22.

The process, which begins right after New Year’s, involves the students studying about steady stream health, water chemistry, environmental changes, and the basics of what makes a trout--a trout. While the 55-gallon tank sits empty in the classroom until November -- when it starts to get filled with water in preparation for the arrival -- the project is something the students look forward to.

“The kids love the trout; they love when the trout come,” said Meagan Beley-Finnemore, a science teacher at MMS. “Some of them wait with us after school when the fish arrive, and they really love being in charge of the fish. If I have to do something, it’s very little compared to what they do.”

Beley-Finnemore says once the tank gets filled in November, the students start to monitor and adjust the water chemistry to get it ready for the eggs to arrive. Once they do show up to the school, the students mostly just make sure the water stays the same temperature -- around 55 degrees fahrenheit -- and that the eggs don’t get sucked up into the tubes.

When they finally start to hatch right before February break, however, there is more hands-on work to be done--in addition to some students creating a sort of attachment to the trout. Beley-Finnemore says those who hatch are sometimes named--football fans this year helping name the first two Lamar Jackson and then Tom Brady.

Because of the coronavirus pandemic, the students didn’t see the fish in person after March 13, but Beley-Finnemore was able to share videos on a YouTube page and photos through her Google Classroom for the kids to see the trout’s development. She stopped in and helped with the maintenance of the fish, but fellow staff members stepped up and assisted in raising the fish with the students not being able to do so as well.

“The custodians were awesome,” said Beley-Finnemore. “Donna and Lonny, specifically, helped feed the fish, and Catherine [Thibault-Cote] fed the fish a lot, too. I came in about once a week to take out some water and clean it, but they did the majority of the fish care.”

Beley-Finnemore says the department usually sees a 60-70 percent success rate in terms of how many of the 100 eggs that are received mature into fish that are eventually released. However, due to this year’s circumstances, only eight made it all the way to Browns.

With fewer fish in the tank, there was the possibility for further growth. Beley-Finnemore said the eight released were bigger than ever--being about 3-4 inches long. She noted how that was due to less competition for food, as well as the custodians possibly being a little generous come chow time.

“Thanks for them, but also I think that they fed them maybe a little too much--like when you send your kid to their grandparents’ house and they come back a different kid,” she quipped.

While the release usually happens in the first week of June, Beley-Finnemore said Browns River was especially warm this year and was at 56 degrees when she tested it--making way for the May 22 send-off.