GEORGIA — The town of Georgia signed a Memorandum of Understanding with the Milton Police Department that began Aug. 1 in an effort to fill holes in patrolling services left by the Franklin County Sheriff's Office

When previously asked about the breach, Sheriff Roger Langevin said the Office could not sustain the financial losses they would have to incur by continuing with the final year of the contract after multiple efforts to renegotiate it were unsuccessful. Georgia officials said they were given “virtually no notice” about the move.

The new contract with Milton, signed July 29, accounts for eight hours a week of patrol coverage. 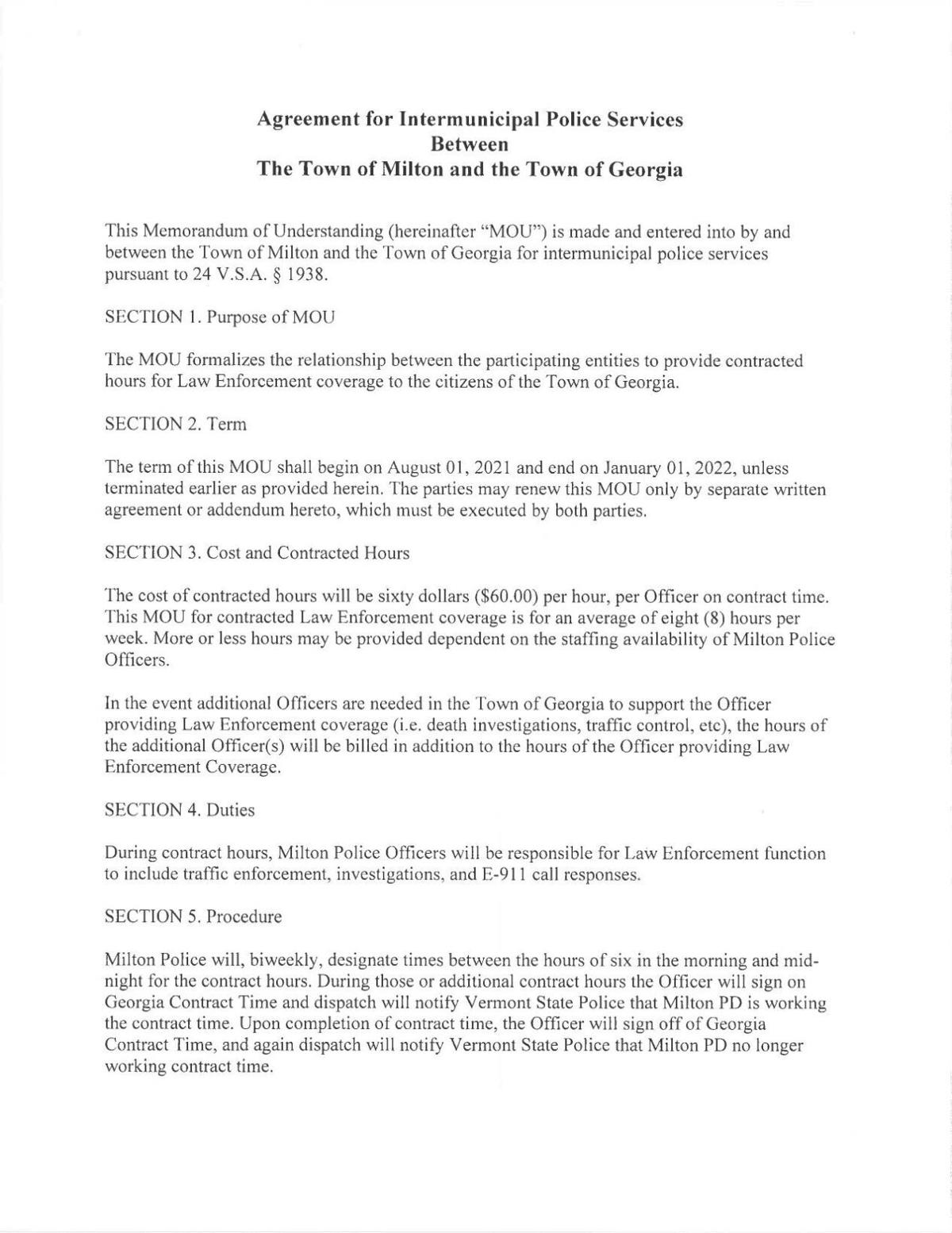 Georgia Selectboard Vice Chair Kyle Grenier said the lower amount of hours in the MOU is because the Milton Police Department revisits scheduling for their officers every 60 days. Once the department revisits those hours, the number of hours dedicated to the town of Georgia is likely to go up.

"Our conversations with Milton have been that we can expect anywhere in the range of eight to 25 hours depending on the availability of their officers, until that new schedule can be created," Grenier said.

The MOU states that whether or not the department will be able to take on more or less hours will be dependent on staff availability.

The MOU also states that Milton Officers during their hours will be responsible for traffic enforcement, investigations and E-911 call responses.

The Milton Police Department will be working with the Vermont State Police to make sure that the patrolling hours won't overlap, minimizing the holes in coverage throughout the week.

Looking to the future

Grenier said the Selectboard went the route of an MOU as opposed to a contract mostly because it allows for greater speed in terms of drafting and signing as well as less of a need for attorneys.

"It was just a quicker process that we could execute directly with the Chief and Milton and their Town Manager," Grenier said.

Grenier also said an MOU is less stringent and allows the Selectboard to adjust terms more easily as the relationship between the town and the Department grows.

The town is paying $60 an hour for the new services from Milton. On the now broken Franklin County Sheriff's Office contract, the town was paying $45 an hour for services.

"The meetings (with Milton) so far have been really positive, so we're excited to work with them on this," said Selectboard Vice Chair Kyle Grenier.

The Selectboard is still working on getting a contract for the coming year once the MOU with Milton is up, but Grenier said whether the new contract will be a year or something longer term like a multi-year contract has not been decided yet.

Georgia is also continuing to work on possibly signing another short-term agreement to get patrolling services in the town as close to normal as possible for the rest of the year.

Grenier said that the Selectboard knew from the beginning that no department was going to be able to step in and completely fill the gap left by the Sheriff’s Office or dedicate the full number of hours they were hoping for.

Grenier also said that issues with staffing are a common theme across all departments.

"The most important part was making sure that we have some patrolling coverage in town," Grenier said. "If that meant that we had to piece a couple of things together, that's great."

Grenier said that very preliminary conversations have begun with the Saint Albans Police Department and City officials about possible future town coverage by the Department, and that the opportunity to work with multiple agencies will strengthen how the town can build a future contract.

Grenier emphasized that the Selectboard wants to make sure the people of Georgia and the people of Milton are comfortable with the services.

"The meetings (with Milton) so far have been really positive, so we're excited to work with them on this," Grenier said.

The MOU with Milton is slated to end on Jan. 1, 2022, although it notes that either party can terminate the agreement earlier provided they give 30 days' notice.

DIRECTOR OF RESTORATIVE JUSTICE
Mylan Technologies, a Viatris Company, has a few