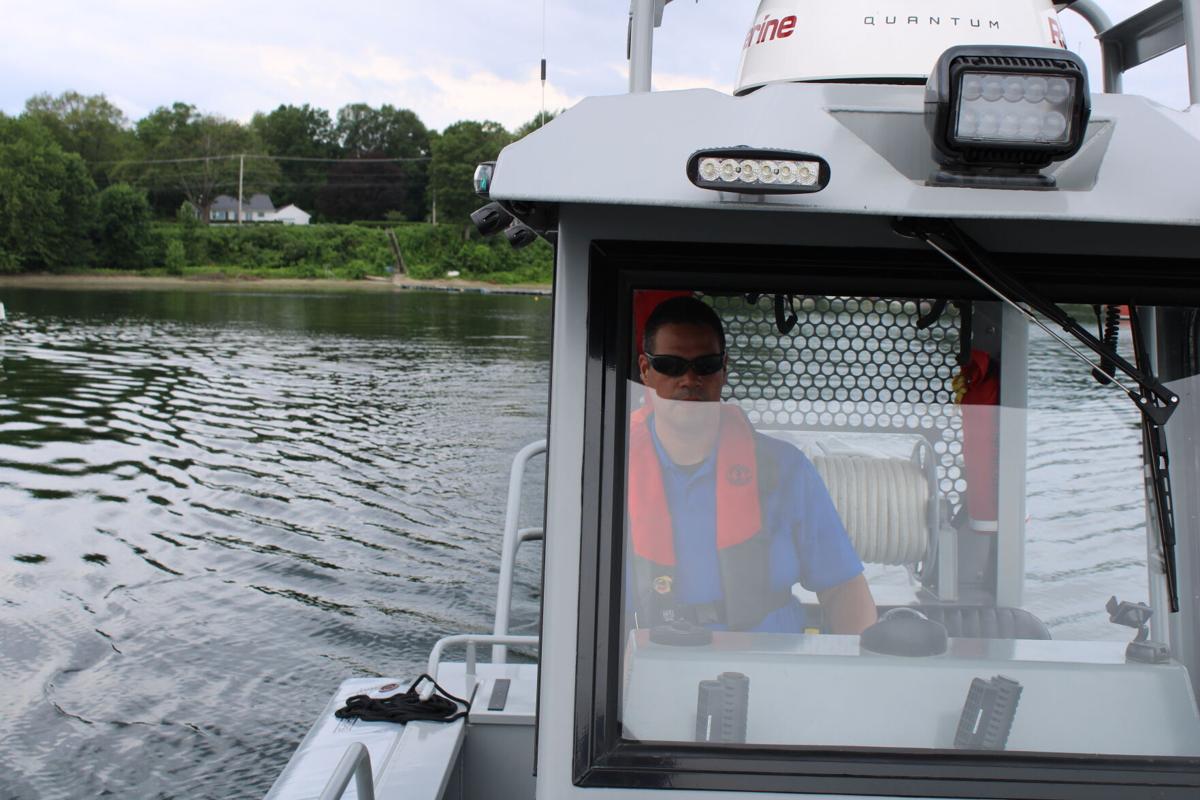 Corporal Stephen Gutierrez sits at the helm of the Colchester Police boat June 30. This is Gutierrez's fifteenth year with the department and his second as harbormaster. 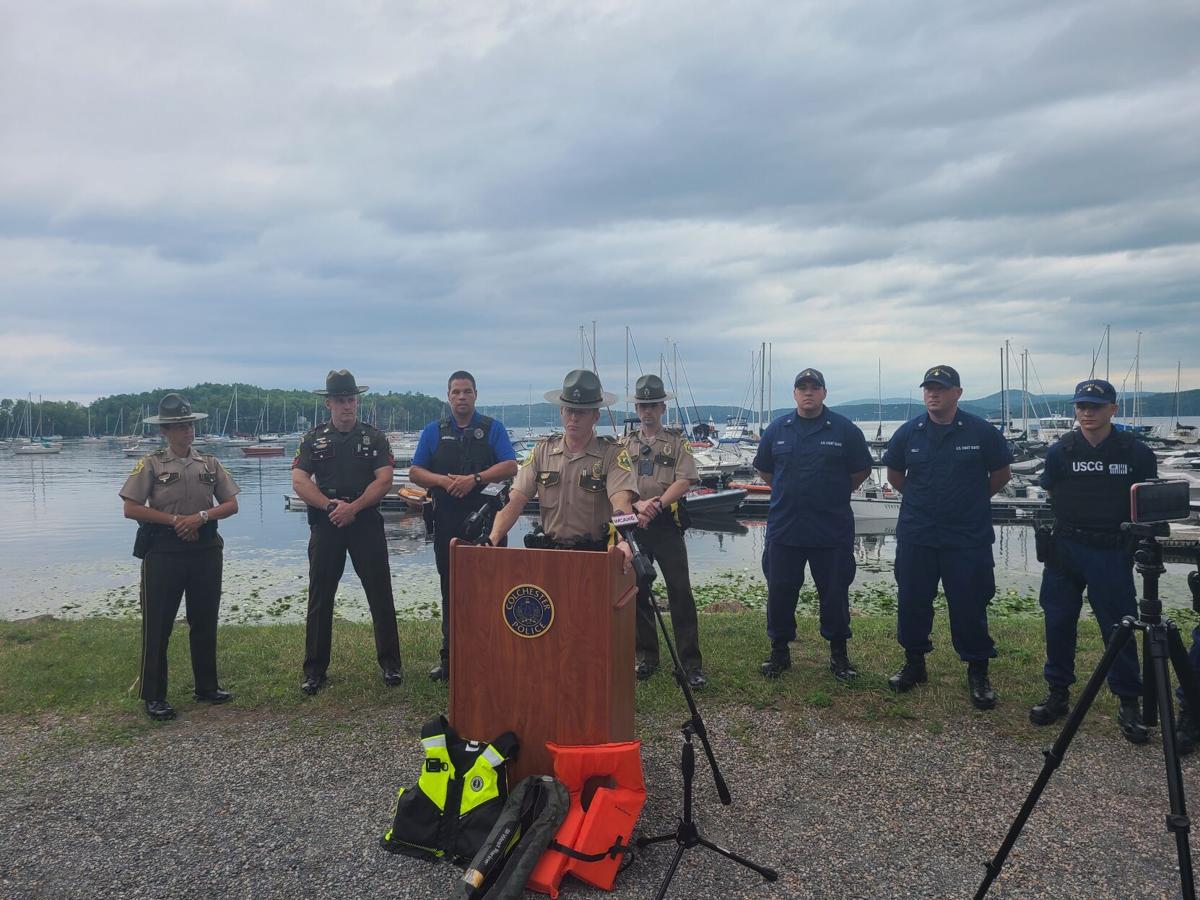 State troopers along with representatives of Colchester Police Department, the Vermont Fish & Wildlife Department and the U.S. Coast Guard discussed boating safety at a June 30 news conference at Moorings Marina on Malletts Bay in Colchester.

COLCHESTER — Vermont State Police say they will be using new techniques on state waterways this summer to detect impaired boaters while conducting boating safety patrols. The effort was under way  this 4th of July weekend.

State troopers along with representatives of Colchester Police Department, the Vermont Fish & Wildlife Department and the U.S. Coast Guard discussed boating safety and efforts to enforce impaired-boating regulations at a news conference June 30 at Moorings Marina on Malletts Bay in Colchester.

A new impared-boating initiative will now have law enforcement conducting field sobriety tests in the water instead of bringing the boat back to shore, officials said. Troopers said that these steps should better enable officers to determine whether a boater is impaired.

Across the U.S., June and July see the highest number of alcohol-related boating incidents. Vermont has had at least one boating-related fatality each year since 2015, according to state police. Sgt. Jay Riggen said detection efforts in the past have often fallen short.

“In the moments where we’ve been able to contact a perhaps impaired boater, our law enforcement has not historically been equipped to identify that impairment at the point of contact,” said Riggen who serves as the impaired driving subject matter expert for the Department of Public Safety and is Vermont’s boating under the influence instructor.

In response to the statistics, Vermont State Police have trained more marine officers at other agencies and implemented new techniques to identify impaired boaters. “While these techniques have been used successfully throughout the United States for the last decade, they are new to Vermont officers,” Riggen said. “Indeed, they will greatly evolve our ability to be the variable in detecting impairment as we seek to prevent the next tragedy.”

In the last few weeks, state police have trained roughly 20 more officers at three different agencies to deploy across waterways throughout Vermont with enhanced detection measures to identify impaired boaters at the point of contact, Riggen explained.

In addition, the state police have also established a new recreation enforcement team which will attempt to cover Vermont waterways such as the Waterbury Reservoir or Lake Iroquois. Patrols at the reservoir, for example, are planned for weekends throughout the summer, according to Vermont Fish and Wildlife Senior Game Warden Robert Currier.

Police are expanding the types of impairment identification testing they use as well. Riggen described a series of tests created by the National Association of State Boating Law Administrators and the Coast Guard that allow an officer to test an individual for impairment without the subject having to stand up.

“They are very, very, very good at detecting people who are impaired and unable to operate a vessel safely. So good in fact, that when this battery of tests is employed, police officers who are trained in this initiative can detect impairment accurately in 91% of their contacts,” Riggen said.

Equally important for marine law enforcement officers is having vessels equipped with the proper technology.

In a ride-along with Colchester Police Department’s full-time marine officer Cpl. Stephen Gutierrez after the press conference, he explained technology on board his patrol boat such as live underwater maps which show how deep the water is. The maps contain data to indicate where prior accidents have happened and they also can display where other police have travelled on the water.

Police boats are also equipped with thermal cameras to identify other boaters, and a hose to deal with fires. As Gutierrez motored around Malletts Bay, he talked about how police cannot ensure safe waterways alone. Vermont boaters play a big role in their own safety by being informed and prepared, he said.

“It’s important to have somebody who’s well-versed in how to operate the vessel that you’re on and also very familiar with the terrain and the area you’ll be navigating,” Gutierrez said. “You know, there are small islands out here that are hard to see, 5 to 11 feet below the surface.”

With live topographic maps, it’s easy to tell what areas are safe, but Vermont boaters must learn for themselves what their surrounding environment is like. During the discussion on the short ride-along, however, Gutierrez was able to point out people breaking rules and not properly aware of their surroundings. For example, one boater was moving closer than 200 feet to Gutierrez’s patrol boat, creating greater potential for an accident.

Riggen agreed, adding that he believes people also require a better understanding of what it means to drive under the influence on the water. The standard .08 blood-alcohol limit sometimes sends the wrong message, they said. Under Vermont law, a motor-vehicle operator or boater with a blood-alcohol level higher than .08 is considered impaired.

“That might communicate to the public that anyone below a .08 is safe,” Riggen said. “But in many cases, human beings, well before .08, start to lose their ability to do things in a safe way.”

Currier also stressed that Vermont boaters must be completely equipped and prepared for a safe outing before getting on their boat, especially when it comes to personal flotation devices.

“The most important thing I would suggest everyone to be aware of is to make sure that they have enough PFDs on their vessels for every individual that is on the vessel,” Currier said. It’s a law for boaters to carry a lifejacket for everyone on board at all times.

“Make sure they’re accessible in case an incident does occur,” he said. “A lot of times PFDSs are stored in a place in a boat where it would take a while if there was a tragedy on the water for those individuals to retrieve those PFDs.”

State, local and federal officers hope these efforts will help keep Vermont accidents – and especially fatalities – on the water in check this summer. As of July 1, four Vermonters had died in water-related incidents; impairment was not a factor in any of the cases, state police spokesman Adam Silverman said.

On March 24, Pierre Dunnigan, 62 from Quebec, drowned on Lake Champlain while kite surfing. Husband and wife Terrence Dinnan, 71, and Marty Illick, 70, died April 19 when their board went over a low head dam on the Lewis Creek in Charlotte. Neither was wearing a life jacket. Their 3-year-old grandson was with them and wearing a life vest and survived.

And just earlier this week on June 28, Barry Nelson, 73 of Essex Junction, died after falling into the water while pulling his sailboat from shore across the channel at the mouth of the Winooski River on Lake Champlain, Silverman said.

According to an Associated Press report of the incident, life vests were found in the water near the pair, but it was unclear whether they were wearing them. Alcohol was not determined to be involved in that incident. Water temperatures at the time were still dangerously cold and hypothermia was a factor, investigators said.

Editor's Note: Connor Adams is a student at the University of Vermont and a reporter for the Community News Service, a student-powered partnership with community newspapers.