You are the owner of this article.
Edit Article Add New Article
Home
News
Sports
Classifieds
Obituaries
Editorial
Business Directory
Things to Do
About Us
e-Edition
NEWSLETTERS
Share This
1 of 6 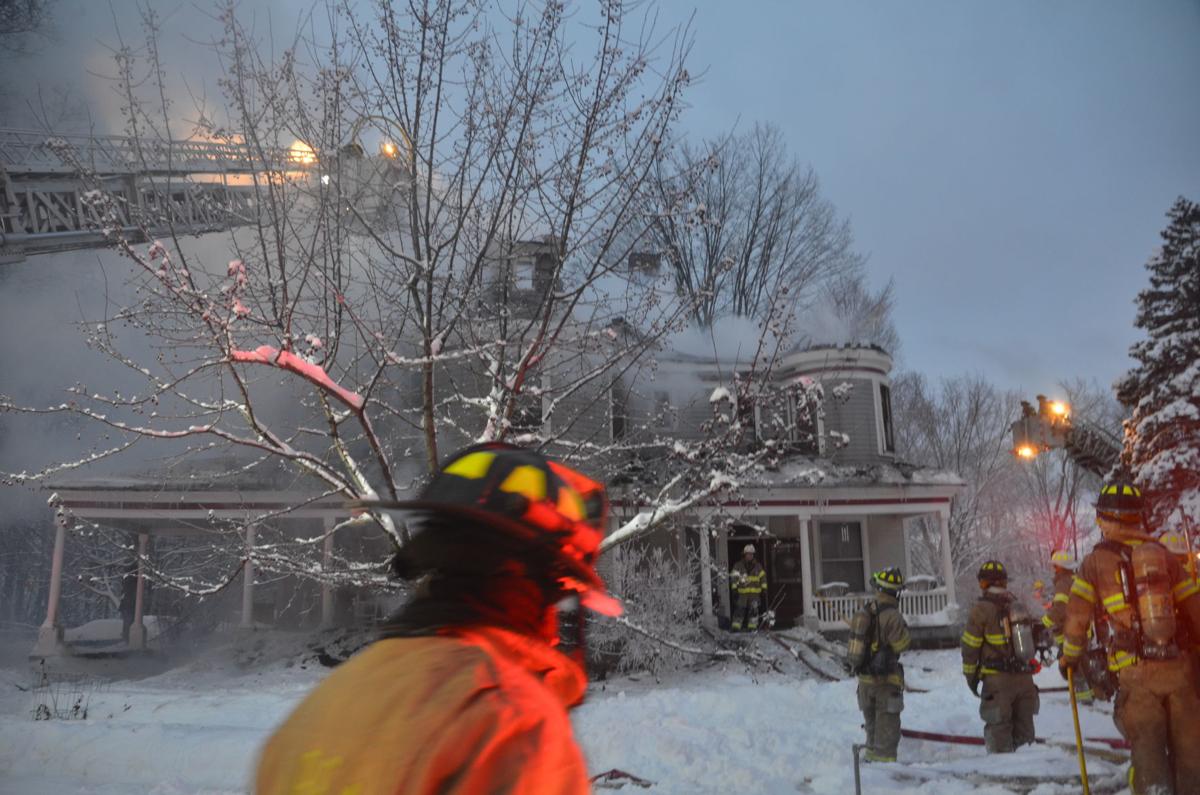 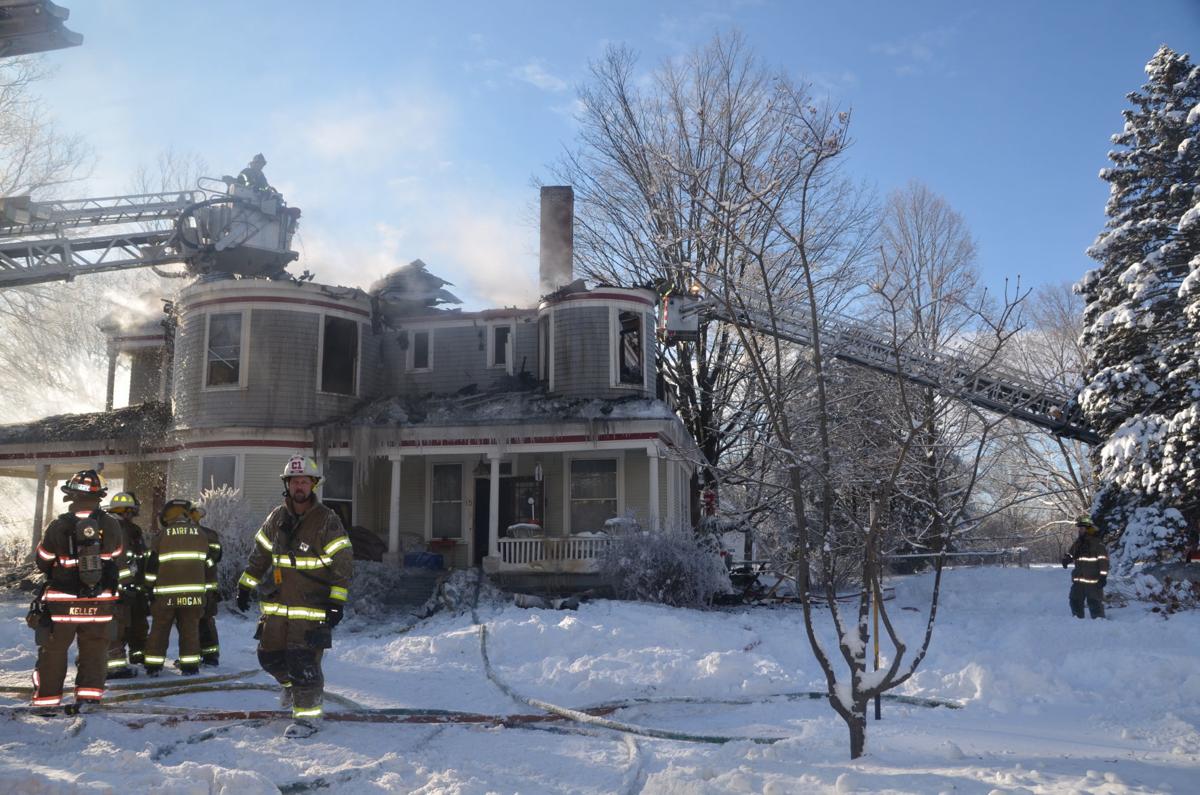 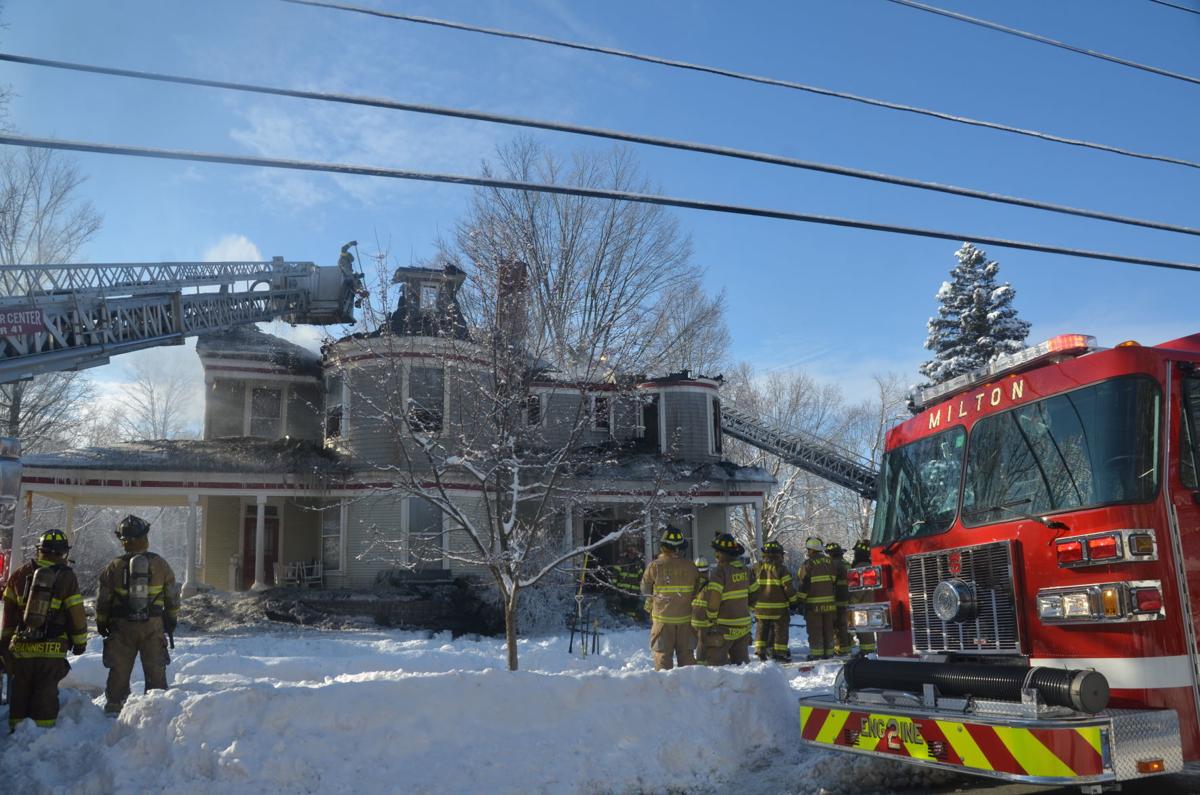 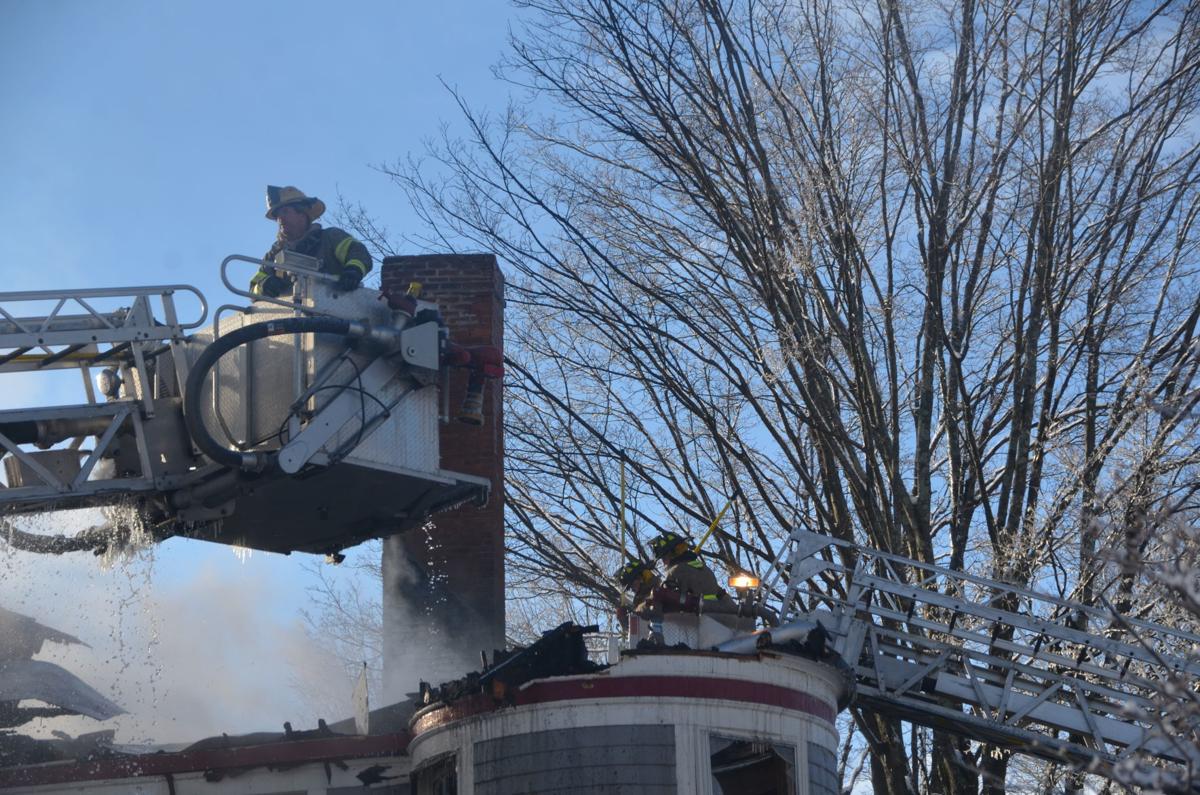 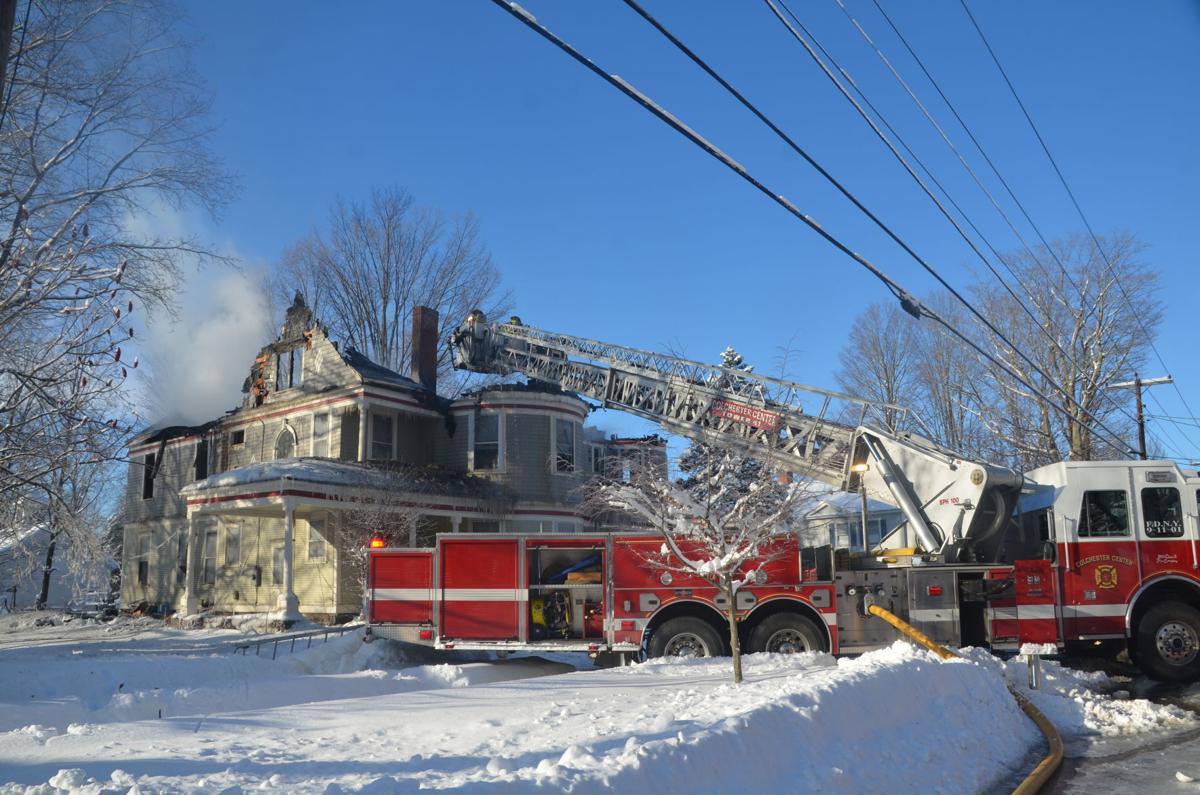 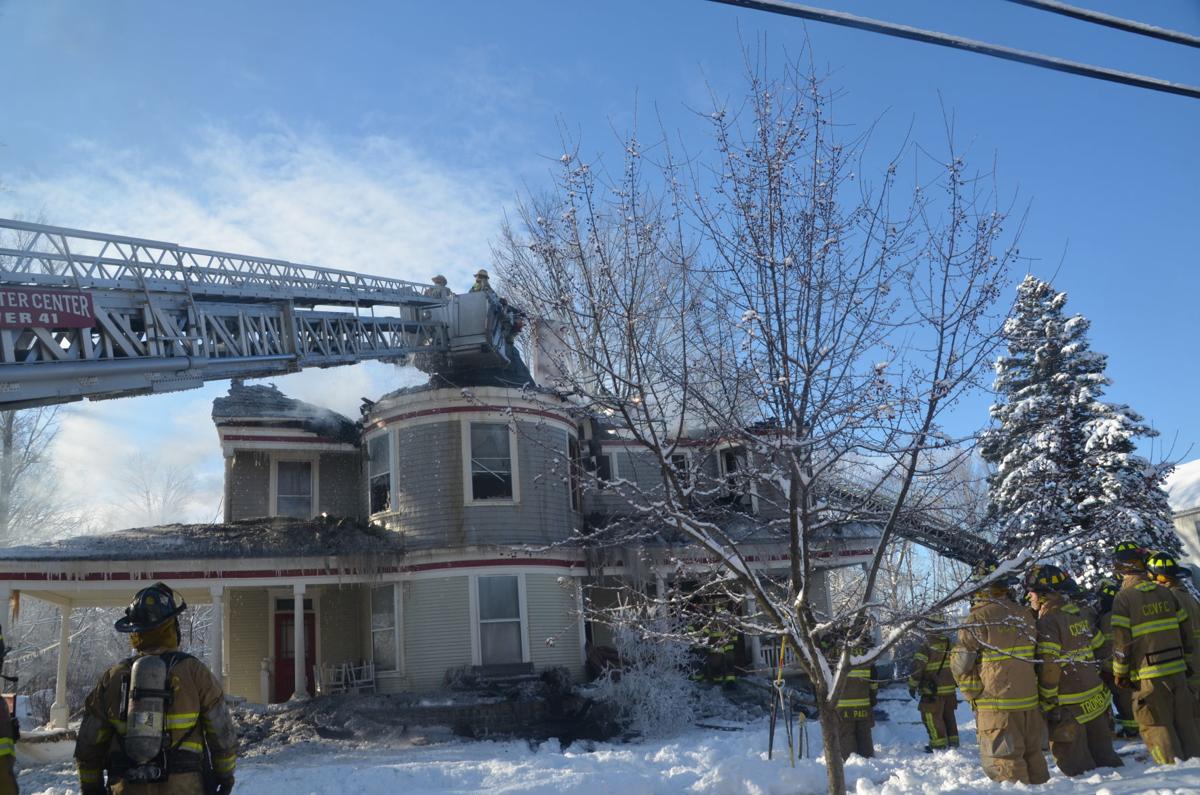 A fire struck one of Milton’s most historic homes this past weekend.

Shortly before 4 a.m. on Saturday, firefighters were called to the home of Charles Barslow at 15 Main Street. The top two stories of the home were severely damaged.

Milton Fire Chief Chris Poirier was the first on the scene. He said a glow could be seen in the attic on the side of the house facing Route 7. Initially firefighters ran a line into the house, up the curving staircase and down the hall to the stairwell leading to the attic. They brought the hose in empty and then charged it, having previously fought an attic fire in the home, said Poirier, they knew it would take longer to drag a filled hose through a historic home with twists and turns.

“The entire attic was fully involved,” said Poirier. “It wasn’t safe to try to fight the fire from the inside at that point.”

Within minutes of firefighters leaving the building, the roof collapsed.

“It was an incredible amount of fire,” said Poirier.

Deeply cold weather made fighting the fire a challenge. “The biggest problem we had was just keeping the water flowing,” said Poirier. “We lost three lengths of hose that burst.”

One thing that did work in firefighters’ favor was a nearby hydrant, which was not buried in snow. Poirier urged residents of the town to clear away snow from around hydrants near their home as having ready access to water can save crucial minutes when fighting a fire.

Firefighters from Essex Town, Colchester, St, Michael’s College, Fairfax and Georgia assisted at the scene, with firefighters attacking the blaze from Colchester and Milton’s ladder trucks.

The cold meant crews had to be rotated every five to ten minutes, as wet firefighters were sent to get warm. Poirier estimated 35-40 firefighters helped to stop the blaze. “We were very lucky to have our mutual aid departments.”

The blaze was under control in about 20 minutes, he said, but then firefighters had to sort through the collapsed slate roof searching for remains of the fire and extinguishing it.

The walls of the house also made fighting this fire a challenge. According to information from Jim Ballard of the Milton Historical Society, the house was built in the years 1900 to 1902 by Eugene Allen for Dr. Luman C. Holcombe. Poirier said the contractor used balloon construction, which was common at the time. With balloon construction the walls are completely open providing a channel through which the fire can travel, Poirier explained.

The house had also been remodeled several times, including the installation of false ceilings, that created gaps where fire could hide, Poirier explained.

Because of the extent of the loss, Poirier requested a cause and origin investigation. Investigators from the fire marshall’s office and the Vermont State Police determined that the fire began in an upstairs bathroom where Barslow first noticed flames after being awakened by smoke. However, there was too much damage to determine the cause, Poirier said. The fire has been ruled accidental.

Poirier said the home is irreplaceable, mentioning features such as the large, round staircase and 6-inch cherry baseboard. “It’s really said. It’s a beautiful home,” he said.

The home originally had 24 rooms when it was built for Dr. Holcombe, who moved to Milton after graduating from the University of Vermont Medical School in 1894, according to a pamphlet on historic homes published by the Milton Historical Society in 1995. The house was operated as a tourist home in the 1930’s and 1940’s, according to the pamphlet, which describes the fireplaces, curved and stained glassed windows and the original woodwork as of special interest.

A porte cochere allowed Holcombe to enter and exit a carriage while being protected from the weather.

Ballard called the fire “a historic loss for Main Street and for Milton.”