You are the owner of this article.
Edit Article Add New Article
Home
News
Sports
Classifieds
Obituaries
Editorial
Business Directory
Things to Do
About Us
e-Edition
NEWSLETTERS
Share This
1 of 3 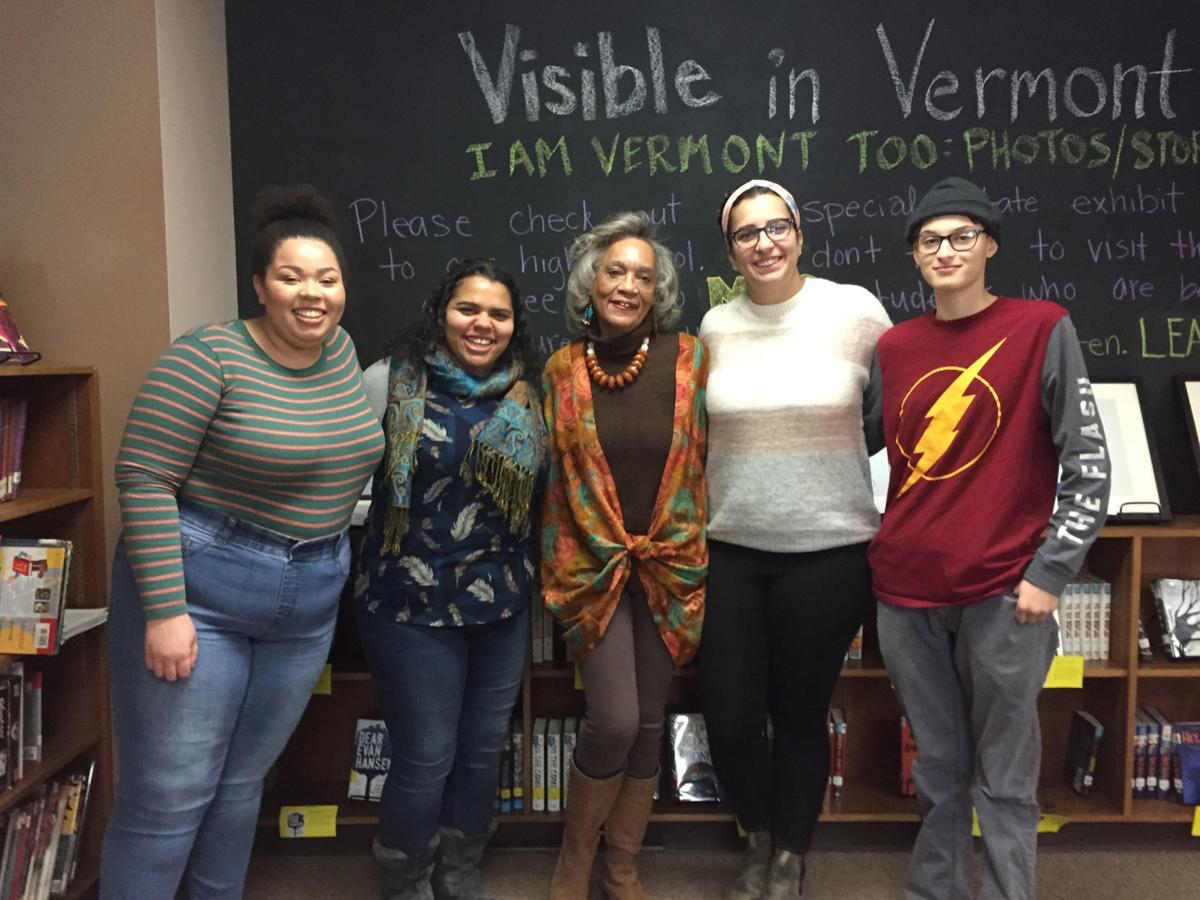 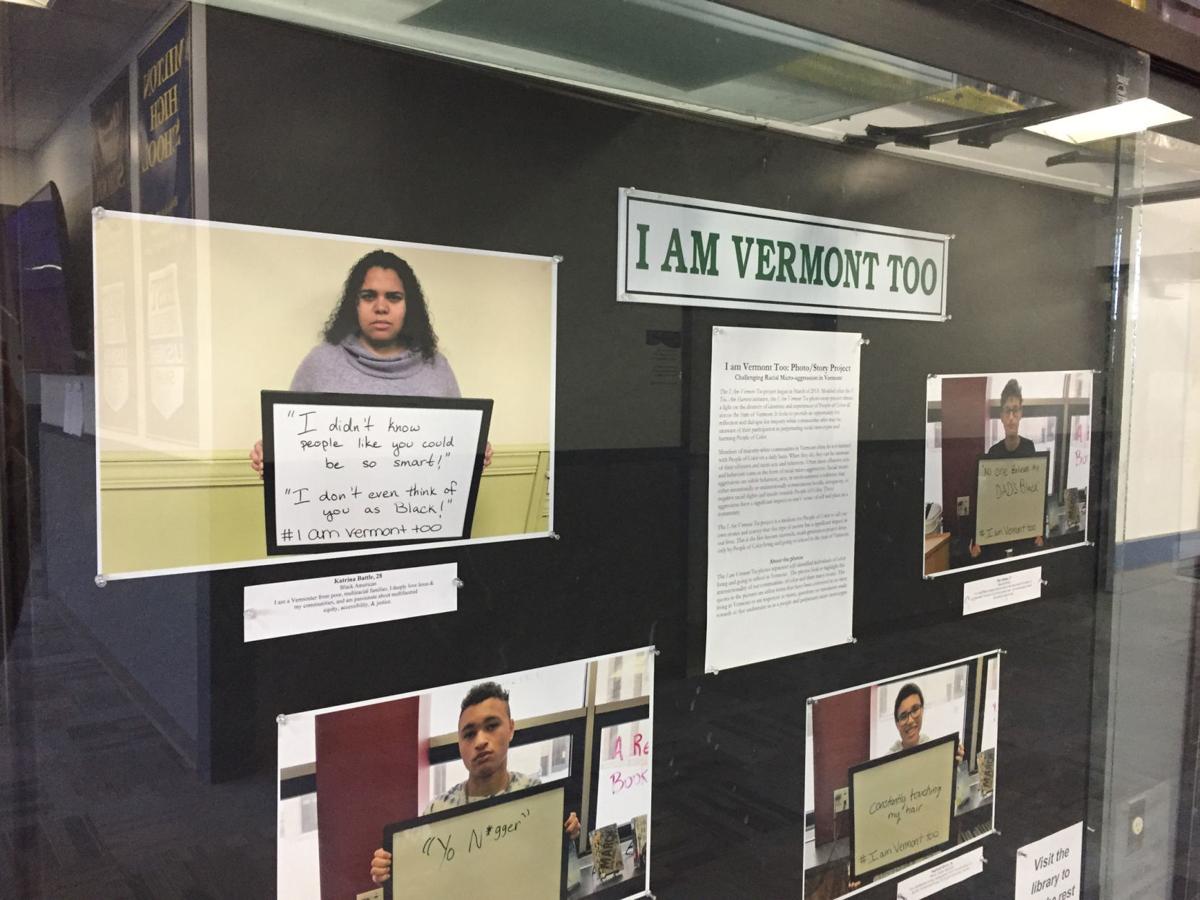 “Visible in Vermont: Our Stories, Our Voices,” is a multi-generational photo and story exhibit highlighting the experiences of people of color living and going to school in Vermont. Katrina Battle spoke at the panel on Jan. 20. 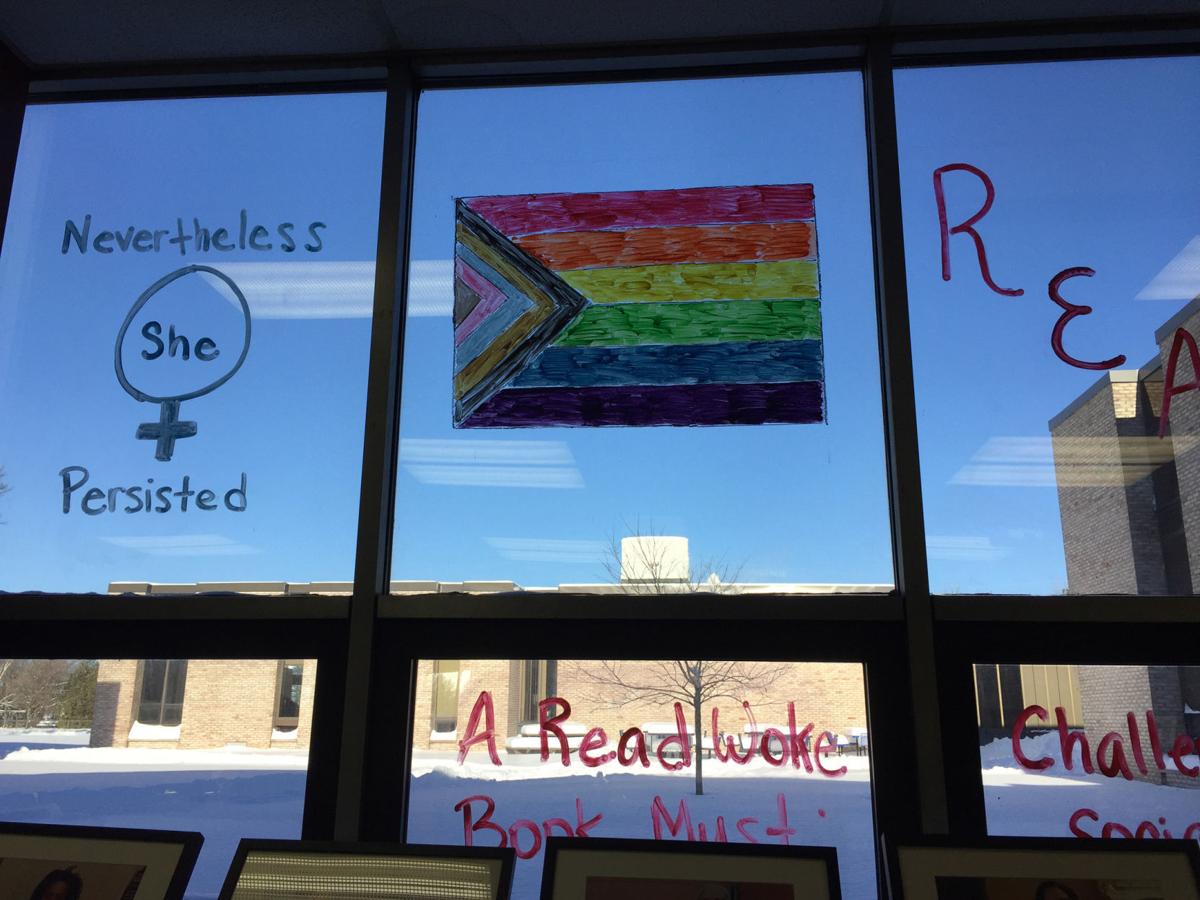 “Visible in Vermont: Our Stories, Our Voices,” is a multi-generational photo and story exhibit highlighting the experiences of people of color living and going to school in Vermont. Katrina Battle spoke at the panel on Jan. 20.

“Milton has never had an MLK celebration or event before,” Battle said, addressing the audience gathered in MHS library. “We’re honored to be the first in the community.”

Organizer Sha’an Mouliert led the discussion, beginning with “working definitions” of terms, then questions for the panelists about microagressions they’ve experienced, what barriers they’ve constructed to protect themselves, and what they think their community could do to make them feel more visible and valued.

“Visible in Vermont,” is a project organized by The Root Social Justice Center exhibiting multi-generational photos and stories in a way that sheds light on people of color living and going to school in Vermont. In addition to the panel discussion, photographs from the exhibit were on display around the MHS library.

According to a press release, the art exhibit, “focuses on the experiences of people of color throughout the state of Vermont, challenging racial microaggressions and the racists acts and behaviors that often go unchecked. This project is an opportunity for dialogue and reflection for majority white communities who are unaware of the impact that their racial microaggressions have on our community. These aggressions have a significant impact on one’s’ sense of self and place in a community.”

Part of the exhibit incorporates a local component as it travels from town to city across the state. Photos of local residents of color were added to the exhibit, each holding a whiteboard with a quote referencing a microagression they’ve experienced, accompanied by hashtag, “I am Vermont too.”

To begin the discussion, Mouliert asked each panelist to introduce themselves and reflect on what quote they wrote on their whiteboard.

Battle identifies as a black woman from a multiracial family and a Miltonian since her family moved to Vermont when she was in eighth grade. “I love to sing and I’m most passionate about cultivating and developing a healthy community—all of the messy, difficult, fun, nourishing work that comes with it,” she said smiling.

“Both of my quotes happened in this building,” said Battle, referencing what she wrote on her whiteboard. When she was a senior at MHS, a teacher told Battle that they didn’t think of her as black. And when Battle was in eighth grade, a student told her, “I didn’t know people like you could be so smart.”

“What strikes me about both of them is that neither person thought what they said was wrong,” reflected Battle. “They thought they were well-intentioned.”

To this day, those moments are frozen in her mind, down to the details. “I can tell you everything about that moment from 15 years ago,” she said.

Battle has learned to use defensive jokes and humor as a barrier to try to make people think she’s okay, that their comments don’t affect her. “I do so much to try to be above reproach,” she said. “I feel like I’m always fighting. That’s what’s come from living in Vermont.”

For the community moving forward, Battle thinks we need to “stop thinking of black people’s needs as an afterthought. Until you make it number one on the list, it’s never going to happen.” She also pointed to engaging in conversation and shifting perspectives in education is necessary. “Make it a priority, help us be seen, teach our histories, the perspective of our ancestors. Acknowledge that being a minority does not mean less than,” she said.

MHS senior Molly Gary identifies as a biracial woman whose passion is science. “I hope to go to college to become a doctor or something in the medical field,” she said. On her whiteboard, Gary wrote that people ask to touch her hair or even touch without asking. “It makes me feel more of an object than a person. People feel that they can take advantage of something different; push past the human part,” she said. “It’s always a shock to me, every single time it happens. It’s kind of like a deer in the headlights moment.”

When Mouliert asked if Gary felt she had created barriers to put up against microagressions, Gary said that she’s more careful and cautious of her personal space to make sure it’s not being invaded. “Like self-defense mechanisms,” she said.

She hopes to see better representation of people of color in education including a history of hair for African American women. “Having teachers or adults in places with other students helping facilitate conversation about why it’s not okay to touch hair, why it’s an invasion of personal space,” said Gary.

MHS junior Kat Adams has been in the Milton School District since she was three years old, and identifies as biracial. On her whiteboard, she wrote, “No one believes my dad is black.”

For Adams, sports have been an important fixture, helping her stay out of trouble and giving her a support system. She recalled a moment in middle school when her dad surprised her at the end of a big game. “I ran and gave him a giant hug in the parking lot,” Adams recalled. “The next day in school, everyone was like, ‘Who was that black guy you were hugging?’” But when she told them it was her dad, no one believed her. “Why would I lie about who my dad is? Some dads aren’t around all the time. He’s back and that’s a lot more than other people get.”

Instead of constructing more barriers, Adams said that she tries to invite her dad to more events and include him on social media. “Instead of putting up walls, I push it towards them so they know and have the information,” she said.

As for how could the community could make Adams and her family more visible and valued, she suggested people to ask more questions. “If you don’t understand something, ask. It’s the only way you’ll ever know,” she said.

Alison Bergeron, a social studies teacher at MHS, first moved to Vermont when she was five and identifies as a black biracial woman. “I’m really passionate about helping youth find their voice, their path and passion. And I’m a huge history nerd,” she said.

One question has stuck with Bergeron throughout her life: “What are you?” For Bergeron, that question is “absolutely infuriating.”

“When you ask that, you’re taking away the person, their individuality,” she said. Bergeron recalled coming up with snarky responses when she was growing up, like, “Oh, I’m a T-Rex.” She also recalled carrying around a photo of her dad to prove to people that she was half black. “The fact that I felt the need to prove to other people—it’s degrading... It continues to be frustrating to have your humanity taken away with just a little comment.”

Moving forward, Bergeron thinks there is power in recognition and ownership. “Cultural humility, being committed to being a life-long learner through critical self-reflection; recognizing and challenging power imbalances,” she said.