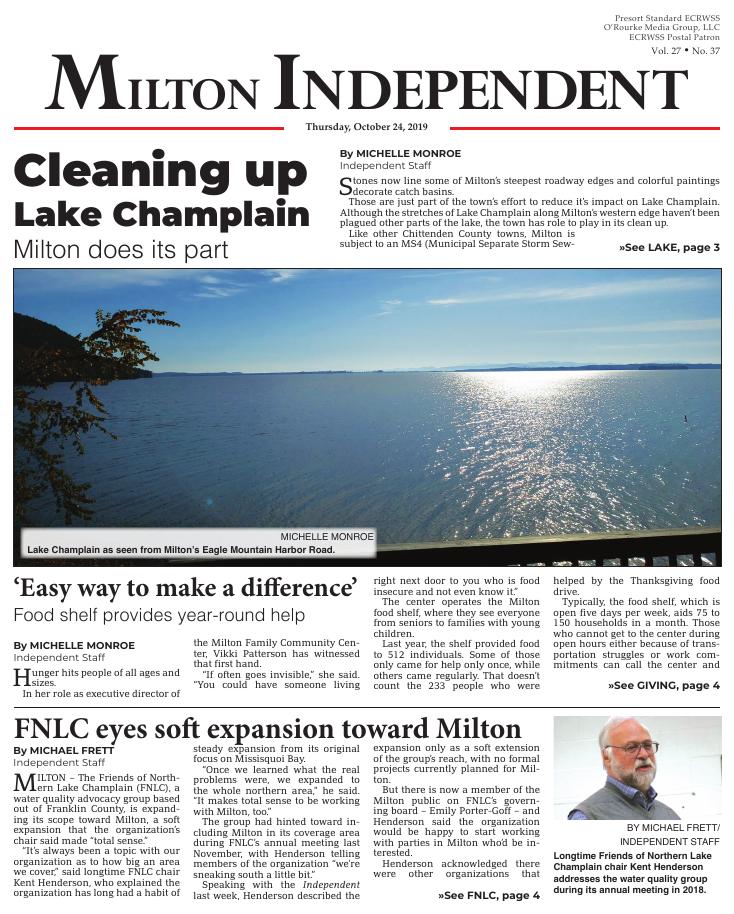 Those are just part of the town's effort to reduce it's impact on Lake Champlain. Although the stretches of Lake Champlain along Milton's western edge haven't been plagued other parts of the lake, the town has role to play in its clean up.

Like other Chittenden County towns, Milton is subject to an MS4 (Municipal Separate Storm Sewer System) permit. Although the name gives little indication of its purpose, the aim of Milton's MS4 is to reduce runoff into the rivers and streams that flow into Lake Champlain. Runoff can carry pollutants directly to the lake. Large volumes of water, such as that flowing off a paved surface, can also erode the sides and bottoms of waterways, including ditches.

The eroded sediment then making its way toward the lake carries with it phosphorous which encourages the excessive growth of blue-green algae. The algae is not only unpleasant. It can be toxic, sometimes killing exposed pets.

By keeping tourists away, the algae causes job and income losses in restaurants, hotels and other businesses, according to a 2016 analysis by the Lake Champlain Basin Program. Looking at several years of data, LCBP determined that for every one-meter loss in water quality, Vermont lost $12.6 million in tourism in the summer months.

Decorating the catch basins is one of the ways Milton is seeking to educate the public about where those basins go and why people shouldn't put things down them.

And people do put things down them. The public works department knows because staff find all kinds of things when vacuuming out the basins, according to David Allterton, Milton's director of public works and town engineer.

As part of its MS4 obligations, the town must do outreach and educate to inform residents about how their actions on the land can impact the lake. Milton has joined with other Chittenden County communities which have MS4 permits to do that work. Collectively, the towns support the website rethinkrunoff.org, which explains the impact of runoff, and has curricula and lessons teachers can use, along with tips for residents on how they can reduce their impact on Lake Champlain. One such tip: wash your car on your lawn rather than your driveway so the water will sink back into the ground.

Getting water to sink back into the ground is also the rational behind the stones and berms going up around Milton's roadways. Both slow the water, giving it time to settle into the ground and reducing the speed and volume at which the water hits rivers and streams. That, in turn, reduces erosion. It also helps to prolong the life of the road by reducing erosion along the sides of the roadway which will eventually undermine it.

"There's a lot we can do to stop runoff from getting into local waterways," said Allerton.

The town just completed a stormwater master plan identifying 60 possible projects within the town. Now the town can select the projects it will work based on how the availability of funding and other resources to complete the work and how much of an impact the project will have. "They're identified now and we can start to pick them off," said Allerton

One such project will be the installation of a sedimentation pond to capture and contain runoff from The Ledges, a steep are above Allen Brook. Currently, "all that stormwater drains down into Allen Brook," said Allerton.

Allen Brook isn't impaired, but it's teetering on the edge. It would be better for the town not to have the brook become impaired, with all of the regulations that will bring, Allerton suggested.

Public works staff now receive training on how to do road maintenance in ways that minimize environmental impact, covering topics such as salt reduction and culvert replacement.

In addition to keeping it own operations up to snuff, the town must also monitor construction projects to make sure the proper erosion controls are in place. Allerton also examines plans submitted to the town to make certain the stormwater management on the site will be adequate and that there is a plan in place to maintain the stormwater system over time.

"There's not one thing that's going to do it," Allerton said of cleaning up Lake Champlain. "it's going to be the summation of thousands of projects up and down the shore."

The MS4 permit is "making us do all this stuff, but it's stuff we should be doing anyway."

To learn more about the town's stormwater efforts, visit miltonvt.gov/stormwater.

The Milton Food Shelf prepares to feed those in need during the winter in this Independent file photo.

Hunger hits people of all ages and sizes.

In her role as executive director of the Milton Family Community Center, Vikki Patterson has witnessed that first hand.

“If often goes invisible,” she said. “You could have someone living right next door to you who is food insecure and not even know it.”

The center operates the Milton food shelf, where they see everyone from seniors to families with young children.

Last year, the shelf provided food to 512 individuals. Some of those only came for help only once, while others came regularly. That doesn’t count the 233 people who were helped by the Thanksgiving food drive.

Typically, the food shelf, which is open five days per week, aids 75 to 150 households in a month. Those who cannot get to the center during open hours either because of transportation struggles or work commitments can call the center and arrange to have someone else pick up food for them, explained Patterson.

Demand does pick up in the winter, when people have less food they’ve grown themselves and more expenses as utility and heating bills increase.

The food shelf was originally a cupboard filled with food to aid families coming to the center for other programs. It grew “more in response to the need than anything,” Patterson said.

The center also offers a child care program for children up to age 5, and an afterschool program.

They operate a parent-child center which does home visits and provide parenting workshops geared to families with young kids, said Patterson.

“We are here for families and the food shelf grew out of that,” Patterson said.

United Way of Northwestern Vermont provides $8,000 to help cover the costs of operating the food shelf. The “remainder comes straight from the community,” said Patterson.

One of those businesses is the New England Federal Credit Union, which is currently conducting its annual Food from the Heart drive. Donations may be dropped off at the Hannaford in Milton through Nov. 1, as well as the food shelf itself. Just let the staff know a donation is part of the Food from the Heart drive and they’ll count it toward the drive.

“It’s a feel good for everybody,” said Patterson of food drives. “it’s an easy way to make a difference.”

MILTON – The Friends of Northern Lake Champlain (FNLC), a water quality advocacy group based out of Franklin County, is expanding its scope toward Milton, a soft expansion that the organization’s chair said made “total sense.”

“It’s always been a topic with our organization as to how big an area we cover,” said longtime FNLC chair Kent Henderson, who explained the organization has long had a habit of steady expansion from its original focus on Missisquoi Bay.

“Once we learned what the real problems were, we expanded to the whole northern area,” he said. “It makes total sense to be working with Milton, too.”

The group had hinted toward including Milton in its coverage area during FNLC’s annual meeting last November, with Henderson telling members of the organization “we’re sneaking south a little bit.”

Speaking with the Independent last week, Henderson described the expansion only as a soft extension of the group’s reach, with no formal projects currently planned for Milton.

But there is now a member of the Milton public on FNLC’s governing board – Emily Porter-Goff – and Henderson said the organization would be happy to start working with parties in Milton who’d be interested.

Henderson acknowledged there were other organizations that included Milton in their umbrella, and assured that FNLC wasn’t interested in “stepping on other watersheds’ toes.”

Instead, he was hoping to keep FNLC open for collaboration with the people and organizations active in Milton. “If there’s somebody with questions” reach out, Henderson said. “I’d like to work together.”

In its work in Franklin County, FNLC projects have directly involved the Lamoille River’s watershed, which runs across the southern edges of Franklin County before bending into Arrowhead Lake in Milton and ultimately emptying into Lake Champlain.

Recently, the organization wrapped up a study conducted with Stone Environmental on a gully in Georgia’s South Village, exploring the ways infrastructure within the South Village could be adapted to stymieing water runoff draining into Deer Brook and, eventually, the Lamoille River.

FNLC is a nonprofit organization supporting water quality-related projects and planning within the northern arm of Lake Champlain, with projects ranging from agricultural improvements to education and municipal planning. 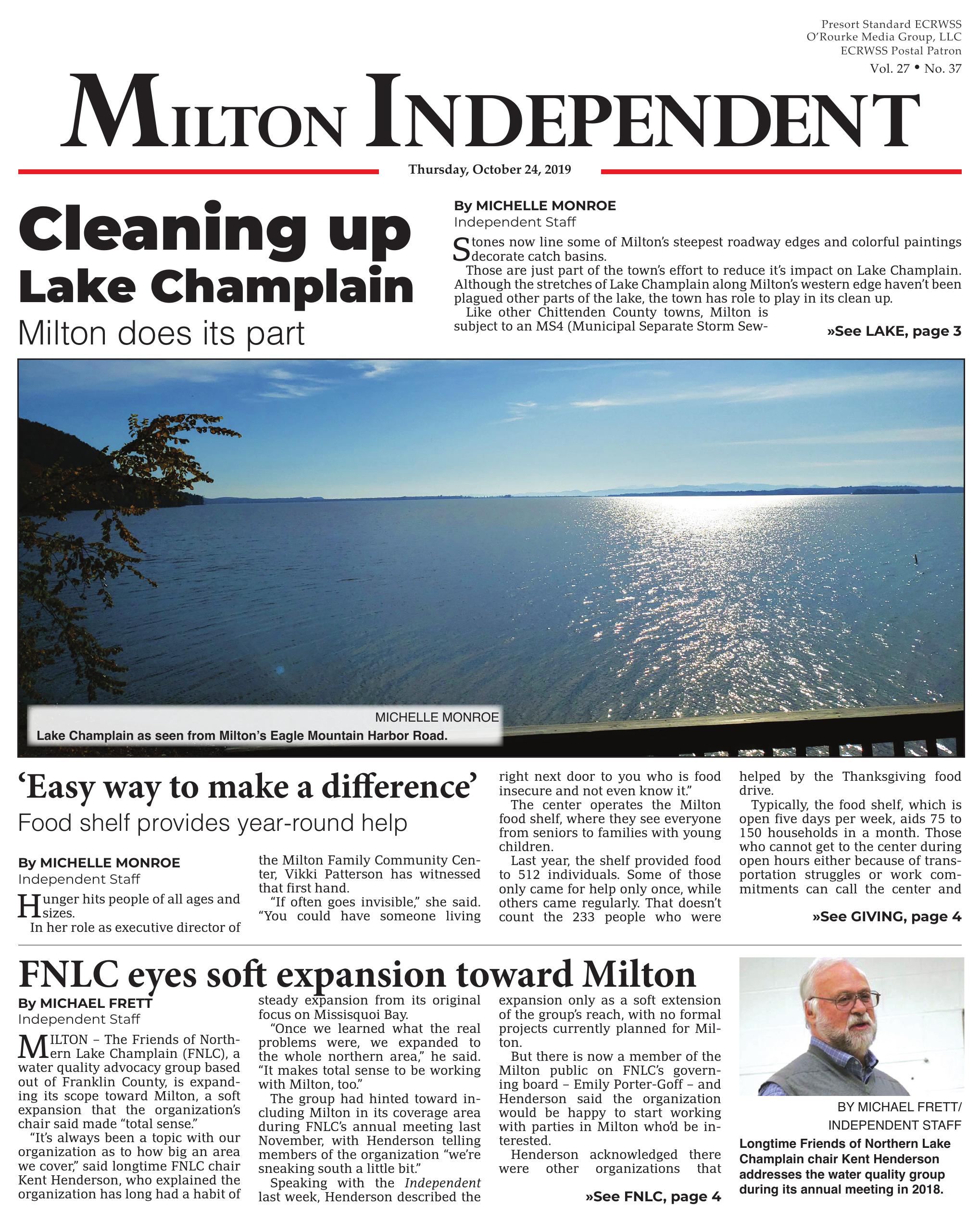