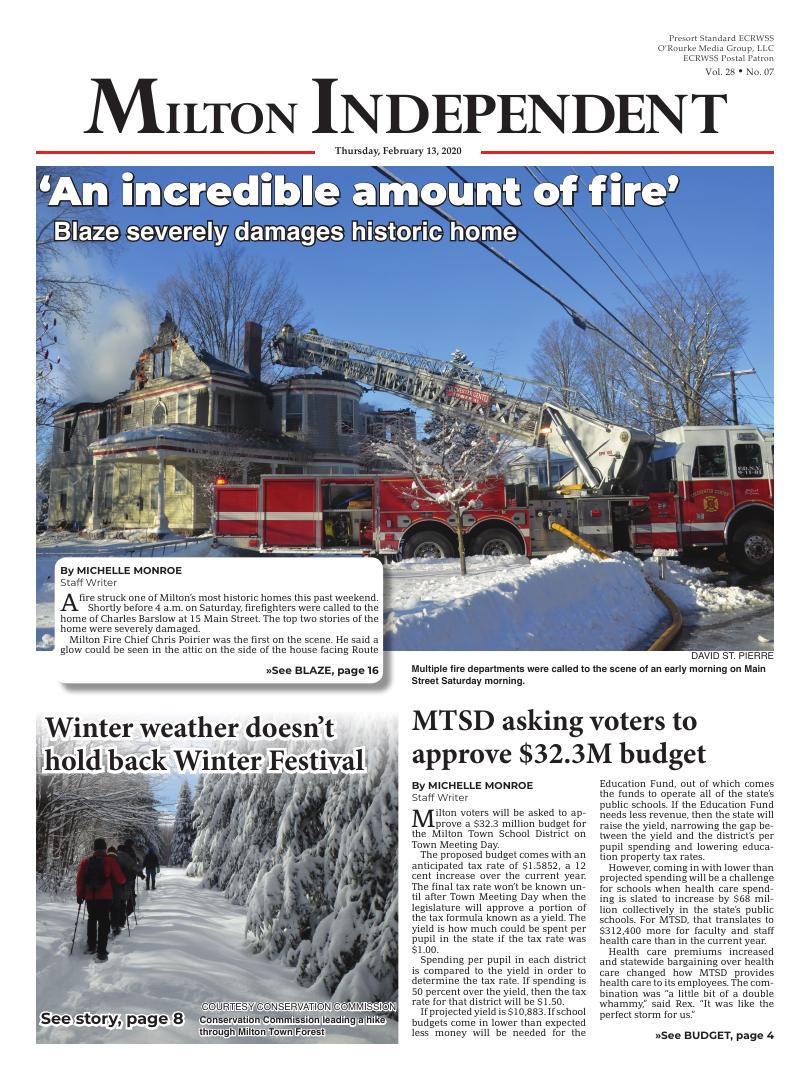 A fire struck one of Milton’s most historic homes this past weekend.

Shortly before 4 a.m. on Saturday, firefighters were called to the home of Charles Barslow at 15 Main Street. The top two stories of the home were severely damaged.

Milton Fire Chief Chris Poirier was the first on the scene. He said a glow could be seen in the attic on the side of the house facing Route 7. Initially firefighters ran a line into the house, up the curving staircase and down the hall to the stairwell leading to the attic. They brought the hose in empty and then charged it, having previously fought an attic fire in the home, said Poirier, they knew it would take longer to drag a filled hose through a historic home with twists and turns.

“The entire attic was fully involved,” said Poirier. “It wasn’t safe to try to fight the fire from the inside at that point.”

Within minutes of firefighters leaving the building, the roof collapsed.

“It was an incredible amount of fire,” said Poirier.

Deeply cold weather made fighting the fire a challenge. “The biggest problem we had was just keeping the water flowing,” said Poirier. “We lost three lengths of hose that burst.”

One thing that did work in firefighters’ favor was a nearby hydrant, which was not buried in snow. Poirier urged residents of the town to clear away snow from around hydrants near their home as having ready access to water can save crucial minutes when fighting a fire.

Firefighters from Essex Town, Colchester, St, Michael’s College, Fairfax and Georgia assisted at the scene, with firefighters attacking the blaze from Colchester and Milton’s ladder trucks.

The cold meant crews had to be rotated every five to ten minutes, as wet firefighters were sent to get warm. Poirier estimated 35-40 firefighters helped to stop the blaze. “We were very lucky to have our mutual aid departments.”

The blaze was under control in about 20 minutes, he said, but then firefighters had to sort through the collapsed slate roof searching for remains of the fire and extinguishing it.

The walls of the house also made fighting this fire a challenge. According to information from Jim Ballard of the Milton Historical Society, the house was built in the years 1900 to 1902 by Eugene Allen for Dr. Luman C. Holcombe. Poirier said the contractor used balloon construction, which was common at the time. With balloon construction the walls are completely open providing a channel through which the fire can travel, Poirier explained.

The house had also been remodeled several times, including the installation of false ceilings, that created gaps where fire could hide, Poirier explained.

Because of the extent of the loss, Poirier requested a cause and origin investigation. Investigators from the fire marshall’s office and the Vermont State Police determined that the fire began in an upstairs bathroom where Barslow first noticed flames after being awakened by smoke. However, there was too much damage to determine the cause, Poirier said. The fire has been ruled accidental.

Poirier said the home is irreplaceable, mentioning features such as the large, round staircase and 6-inch cherry baseboard. “It’s really said. It’s a beautiful home,” he said.

The home originally had 24 rooms when it was built for Dr. Holcombe, who moved to Milton after graduating from the University of Vermont Medical School in 1894, according to a pamphlet on historic homes published by the Milton Historical Society in 1995. The house was operated as a tourist home in the 1930’s and 1940’s, according to the pamphlet, which describes the fireplaces, curved and stained glassed windows and the original woodwork as of special interest.

A porte cochere allowed Holcombe to enter and exit a carriage while being protected from the weather.

Ballard called the fire “a historic loss for Main Street and for Milton.”

Despite two feet of snow on Friday and bitter cold temperatures on Saturday, the Milton Winter Festival was a success.

Friday’s Party in the Park was moved to Sunday, with fireworks bringing the event to a close rather than kicking it off. But residents got word of the change, with 300-400 people filling Bombardier Park West. “The crowd was huge,” said Duchesneau. In addition to the fireworks, there was music, a bon fire, hot chocolate, s’mores and pizza. Olaf from Frozen also stopped by for a visit.

Olaf was also in the park earlier in the day for rides in a dog sled and horse drawn carriage. The library also held its annual chili cook-off.

Saturday’s celebrity breakfast raised $524 in donations for the Milton Family Community Center food shelf. Attendance at the breakfast was a little lower than usual. “People were still kind of digging out,” Duchesneau said.

Eight people braved the cold to go snowshoeing through the town forest with the Conservation Commission. “It was chilly, but everyone was bundled up,” Duchesneau said.

Things were a little bit warmer at the family dance that night, which Duchesneau said she heard was a lot of fun.

Milton voters will be asked to approve a $32.3 million budget for the Milton Town School District on Town Meeting Day.

The proposed budget comes with an anticipated tax rate of $1.5852, a 12 cent increase over the current year. The final tax rate won’t be known until after Town Meeting Day when the legislature will approve a portion of the tax formula known as a yield. The yield is how much could be spent per pupil in the state if the tax rate was $1.00.

Spending per pupil in each district is compared to the yield in order to determine the tax rate. If spending is 50 percent over the yield, then the tax rate for that district will be $1.50.

If projected yield is $10,883. If school budgets come in lower than expected less money will be needed for the Education Fund, out of which comes the funds to operate all of the state’s public schools. If the Education Fund needs less revenue, then the state will raise the yield, narrowing the gap between the yield and the district’s per pupil spending and lowering education property tax rates.

However, coming in with lower than projected spending will be a challenge for schools when health care spending is slated to increase by $68 million collectively in the state’s public schools. For MTSD, that translates to $312,400 more for faculty and staff health care than in the current year.

Health care premiums increased and statewide bargaining over health care changed how MTSD provides health care to its employees. The combination was “a little bit of a double whammy,” said Rex. “It was like the perfect storm for us.”

In response, plans to add some staff, particularly to address the social and emotional needs of students, were shelved. Cuts were made instead. A half time position teaching students for whom English is not their native language was cut. Hours for the health clerk were cut. Cuts were also made to field trips, staff training and development, field maintenance, and replacing older equipment and furniture.

Even with the cuts, the budget is up 3.7 percent. Without the cuts, just keeping the existing staff and programming, the budget would have increased 6.77 percent, according to Rex.

Milton was also hit with a decrease in revenue. Last year the board agreed to stop using budget surpluses from previous years to offset current expenditures because the amount varies from year to year, sometimes dramatically. “You can’t guarantee that,” said Rex.

At MTSD that count dropped significantly. The equalized count isn’t the number of students in the school. Instead, it’s weighted to reflect the difference in resources needed to educate students in different grade levels and with different needs. Pre-schoolers, for example, count for less than high school students. Students from low income families are weighted more heavily, as are students with special needs or students for whom English isn’t their native language.

The state lowered MTSD’s equalized per pupil count by 37.7 students, to a number lower than the actual number of students in the district. Rex said it is unclear what caused the drop.

The tax rate must still be adjusted by the Common Level of Appraisal (CLA). Because all school taxes are paid into the Education Fund, the legislature did not want to let towns artificially lower their tax bills by letting the appraised value of properties in the town fall below their actual value. Conversely, if appraised values exceeded the market value of properties in the town, then residents would be paying more than their fair share into the Education Fund.

The CLA compares appraised value of properties in the town which have sold over the past three years to the sale price. In Milton’s case, properties are selling for nearly 5 percent more than their assessed value.

More information about the budget is available at www.mtsd-vt.org. 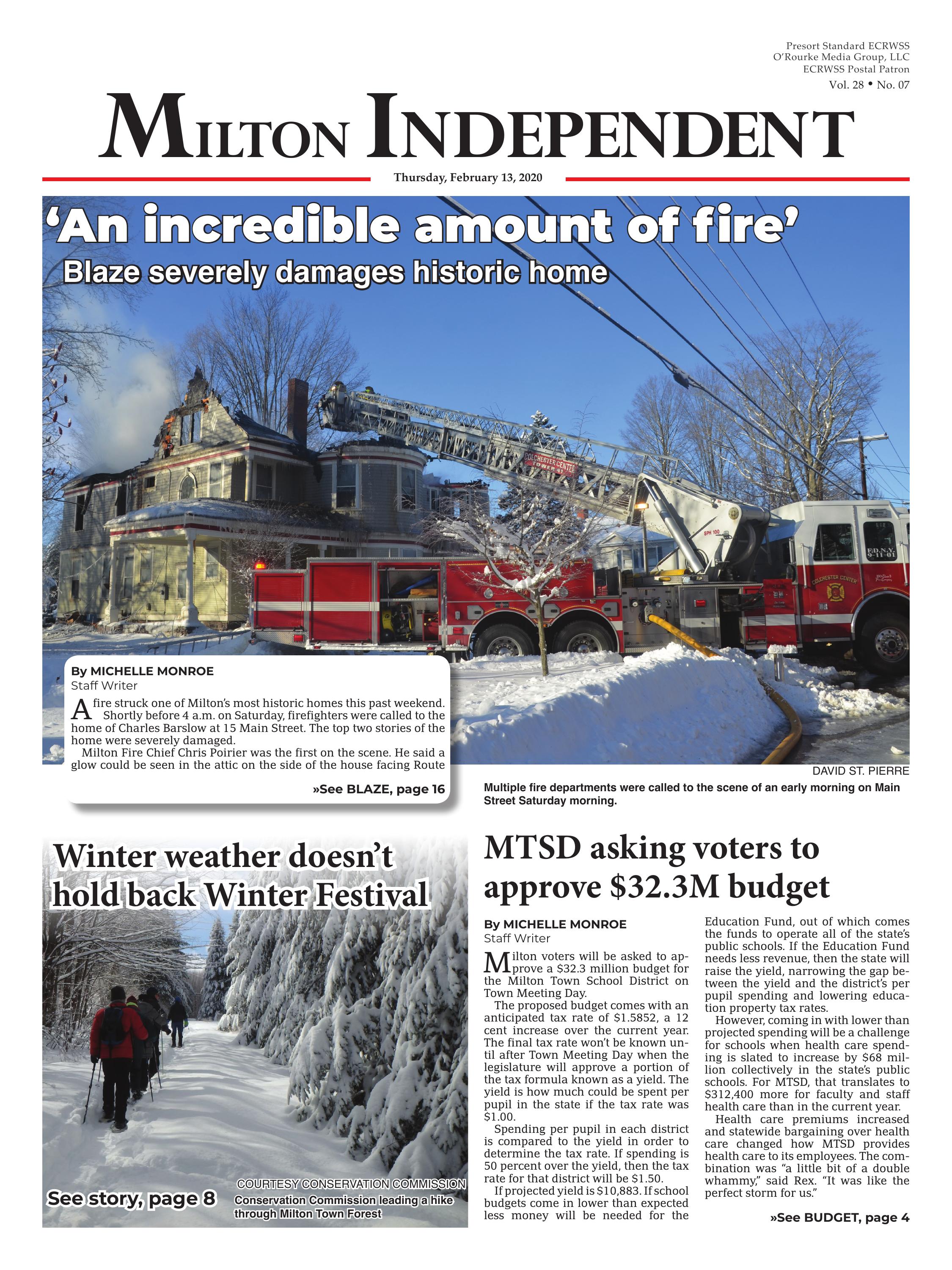